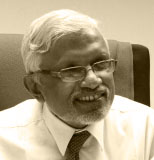 Mr. Wasantha Deshapriya is the Secretary to the Ministry of Telecommunication and Digital Infrastructure. He was educated at Dharmasoka College, Ambalangoda and at the University of Kelaniya, Sri Lanka. He has been awarded a Postgraduate Diploma (ICT) from the University of Colombo School of Computing (UCSC) and completed his MSc Degree at Reading University, UK. Mr. Wasantha Deshapriya is a Sri Lanka Administrative Service officer with more than 30 years of public sector experience. He has been extensively involved in Government computerization projects.

Mr. Wasantha Deshapriya, who is at present the Secretary to the Ministry of Telecommunication and Digital Infrastructure of Sri Lanka is a Science graduate from the University of Kelaniya. He joined the Sri Lanka Administrative Service (SLAS) after working at the University for a short period.

When Mr. Wasantha Deshapriya entered SLAS he was initially posted to the Rubber Control Department which had commenced a project on computerizing subsidy payments and registrations of rubber land. On his very first day at work, Mr. Deshapriya was requested to join a discussion on the project requirements and the solutions to be developed. From that day onwards, Mr. Deshapriya was posted to various parts of the country where rubber was grown. At every sub-office where he worked he was in charge of the computer unit. The computers at the Rubber Control Department were Wang mini computers and the language used was COBOL.

Mr. Wasantha Deshapriya was trained at the Asian Institute of Technology in Thailand and he has also been awarded a postgraduate degree in IT from the University of Colombo School of Computing (UCSC).

Thereafter Mr. Deshapriya joined the Ministry of Public Administration where the scope was wider. Mr. Deshapriya was appointed as the Senior Assistant Secretary (SAS), IT. This was the first SAS-IT appointment in Government. At this Ministry he encountered many challenges which could not be solved through paper based processes and procedures. The Public Administration circulars used to be printed in three languages and dispatched by post and a large number of people were employed for this task. This was 1998. The Ministry then commenced converting the circulars to pdf with the Secretary’s scanned signature, and emailing to the recipients. Another issue encountered was searching and finding a previous specific Circular. Mr. Wasantha Deshapriya illustrates this in the following story; a person who was about to retire from the Valachchanai Paper Factory had come all the way to Colombo to seek a specific Circular which he needed to get his salary adjusted. This person’s income without the adjustment was not sufficient for living. Mr. Wasantha Deshapriya, sadly, had not been able to find the Circular. This event triggered Mr. Wasantha Deshapriya to get the Circulars from 1970 onwards scanned, indexed, numbered and made available on the website which the Ministry developed. He states that a Roadmap and a strategy was needed to implement e-government.

During this period, Mr. Wasantha Deshapriya was selected to join the study tour on e-Government to Sweden and Estonia, which was organized by CINTEC. e-Government strategies being implemented at national level were explained during this visit.

Thereafter, in 2003, Mr. Wasantha Deshapriya responded to a newspaper advertisement on joining the newly established Information and Communication Technology Agency of (ICTA) Sri Lanka which was to implement the e-Sri Lanka Development Project (eSL). Mr. Wasantha Deshapriya was appointed to the e-Government section, initially as a e-Government Specialist and was later promoted to the post of Director e-Government. A survey was carried out on Government organizations in 2004 to assess the situation and to map the way forward. It transpired that at that time there were only 14 Government websites. And a key impediment was the lack of awareness and capacity. The processes used in Government organizations were also an issue. These had to be re-engineered before IT solutions could be implemented. Thus, at ICTA, the area e-Government was termed “Re-Engineering Government”.

Key projects implemented by ICTA during his tenure included the following;

The Lanka Government Network (LGN) which covered almost all the key Government institutions and the entire country. The Government Information Center (GIC – 1919) was a centralized location for providing Government information. ICTA’s venture on setting up GIC fulfilled a long-felt gap needed to serve the citizens of Sri Lanka. GIC provides information through multiple channels; through the phone, online (www.gic.gov.lk) or through mobiles. With the implementation of the project Digitizing Birth, Marriage and Death certificates (BMD) citizens could access birth, marriage and death certificates efficiently and effectively.

Lanka Gate was the gateway for electronic information and electronic interactions in Sri Lanka. This Country Portal (www.lk or www.srilanka.lk) is a key access point to Government organizations and businesses in Sri Lanka. Government web presence was improved with the development of 495 trilingual Unicode compliant websites and Government staff were trained on managing content and maintaining websites. The project e-Samurdhi improved the efficiency and effectiveness of the Samurdhi Authority by providing an ICT solution to manage the Samurdhi beneficiaries and manage microfinance projects with respect to Samurdhi beneficiaries.

ICTA took the lead role with the Ministry of Finance in preparing the Financial Regulations (FR 447/2010), which has enabled the use of Credit Cards and electronic payment methods (including mobile payments) to pay for government services. The e-Revenue license was consequently implemented.

Capacity building was needed to implement e-Government projects. Particularly, e-Leadership capability in Government was critical for implementing reform, for re-engineering Government and introducing e-Government systems. Therefore, programs were implemented for raising awareness and training Chief Innovation Officers (CIOs) of Government organizations. Senior and middle level Government officers followed a part time two-year MBA in e-Governance at the University of Moratuwa. This is the first MBA in e-Governance in Sri Lanka. Government officers were provided with basic ICT skills and technical training to ensure that the public sector was equipped with the competencies needed to manage and administer eGovernment systems. Over 15,000 Government officers were trained in basic ICT skills, ICT technical skills and in leadership skills under ICTA’s ICT Human Resources Development program.

Mr. Wasantha Deshapriya further explains that work on developing the e-Government policy commenced around 2004/5. This process was carried out with extensive consultation. The draft policy was approved by the Cabinet in 2009. Mr. Wasantha Deshapriya emphasizes that all activities were carried out through consultative processes. From 2004 to 2014 severe challenges had to be overcome, a roadmap was developed and most items in the roadmap were achieved. It is to be noted that Sri Lanka climbed 41 places in the United Nations e-government development index (EGDI), from the 115th position in 2012, to the 74th position out of 193 countries in 2014. This is a percentile ranking of 38.5%. Therefore, Sri Lanka was in the top 40% of countries in the world engaged in implementing an e-Government agenda.