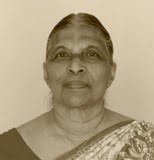 Ms. Nayeni Fernando is a graduate in Physical Science of the University of Ceylon. She obtained a Master’s degree in Social and Economic Statistics from the George Washington University, USA. She is a Fellow of the Computer Professional’s Association (CSSL) of Sri Lanka. She was also recognized by the Zonta Club with a Woman of Achievement award in 1993.

She commenced her career in IT as a programmer in 1971 at the Department of Census and Statistics, and served the Central Bank of Sri Lanka from 1978 to 2000. She was responsible for implementation of the Sri Lanka Automated Clearing House (SLACH) in 1988 and was its Manager for six years. In 1993 she initiated and took a leadership role in introducing an offline Funds Transfer System SLIPS (Sri Lanka Interbank Payment System). From 1994 to 2000 she was the Director of the IT department of the Central Bank. She provided leadership to the IT department to recover speedily after the terrorist bomb attack on the Central Bank in 1996, which completely destroyed its computer systems. She was also the coordinator for the Financial Sector in the Sri Lankan team for Y2K readiness. She retired from the Central Bank in April 2000, after reaching the eligibility age for retirement.

From 2000 to 2002 she worked as the Consultant IT of the Bank of Ceylon. From 2002 to 2008 she worked as an IT consultant in the private sector. From 2008 to 2011 she was the onsite Project Manager for implementing a country wide Electronic Cheque Clearing System and an Electronic Funds Transfer Network for the Bangladesh Central Bank, successfully implemented in 2010. Ms. Nayeni Fernando is a founder member of the Computer Professional Association and served in its council and as vice president from 1993 to 1995.

Ms. Nayeni Fernando’s name was synonymous with IT implementation at the Central Bank of Sri Lanka and in the banking industry in which she has been instrumental in reaching many milestones for over 20 years.

As an undergraduate at the Faculty of Science, University of Colombo, she had the privilege of being taught by Prof VK Samaranayake who was later known as the “Father of IT in Sri Lanka”. Her studies benefited her career in IT as an Analyst Programmer and a Project Manager by training her mind to think logically.

Department of Census and Statistics

Ms. Nayeni Fernando’s entry into the IT field was not planned. A friend persuaded her to respond to an advertisement placed by the Department of Census and Statistics. She was among the six persons who were selected out of nearly 400 applicants. This was in 1971.Ms. Fernando had no prior education either in programming or in data processing. The Department of Census and Statistics sent the newly recruited programmers to IBM in the mornings to learn coding in RPG (Report Program Generator) language. At the Department, she, with the other programmers coded and tested the programs for processing the 1971 sample Census of Population.

The Computer environment at the Department of Census and Statistics comprised an IBM System/360 mid-range computer. The RAM was 24 KB. The operating system (OS) was a tape OS and the programs were punched into cards – i.e. punch cards. Later the OS was upgraded to a disc operating system. The work here comprised mainly writing programs to process the censuses and surveys carried out by the Department. The languages used were mainly RPG and also COBOL, FORTRAN and ASSEMBLER.

Ms. Nayeni Fernando joined the Central Bank of Sri Lanka in 1978 as an Analyst Programmer. With the taking up of this post she achieved two “firsts”; she was the first external recruit to the Data Processing Division and also the first female Analyst Programmer. Here, she was initially assigned the task of computerizing the Government Accounts Branch (GAB) of CBSL. The data entry section of CBSL had about 25 Wang PCS II machines. Using BASIC, Ms. Fernando managed to give a novel solution to GAB through which work was expedited and more comprehensive and timely data could be obtained.

Implementing SLACH was another significant milestone. In 1985 Ms. Nayeni Fernando was assigned the post of Project Coordinator for implementing the Automated Cheque Clearing House in Sri Lanka. Until then, clearing cheques had been a manual, tedious and time-consuming process. CBSL sent Ms. Fernando for training to the Singapore Clearing House which is operated by the Banking Computer Services (Pvt) Ltd for the Monetary Authority of Singapore. After returning to Sri Lanka, Ms. Nayeni Fernando managed the implementation of the same process in Sri Lanka with her team comprising two Operations Managers, Mr. Justin Wickremasinghe, Mr. Ariyawansa and the two Analyst Programmers, Mr. CB Pathberiya and Mr. Sunimal. Consequently, SLACH was implemented on 2nd March 1988.

With the implementation of SLACH, the work of the Clearing Departments of banks was greatly reduced. The time taken for clearing cheques was also greatly reduced. Within a year all cheques in the country other than those in the then terrorist-torn areas, were being cleared in 1 to 3 days. Ms. Nayeni Fernando was the Manager of SLACH from its inception until 1994.

Sri Lanka Inter Bank Payment System (SLIPS) was yet another significant project initiated by Ms. Nayeni Fernando in the development of payment systems in the country and was introduced in 1993, initially as an offline funds transfer system for low value bulk payments. (Later, in 2010, SLIPS was upgraded to an online Inter Bank payment system) This was a useful facility, especially for salary payments. With facilitation from Mr. Sivagananathan, who was then DGM at the Bank of Ceylon and with the Sri Lanka Banks’ Association agreeing to fund the project, CBSL was able to implement the Sri Lanka Interbank Payment System (SLIPS). On the first day, the project was commenced by routing just six money market transactions. Within a year, due to the increase in volumes, the hardware had to be upgraded. Today, SLIPS is almost a household word. Ms. Nayeni Fernando recollects the work carried out by the CBSL team and the solution provider BC Computers, with great pride and appreciation. She also commends the significant role played by the SLIPS Committee which had representation from several banks.

Another defining moment was when Ms. Nayeni Fernando was transferred from the SLACH to the Head Office in 1994 to be in charge of the IT Department. CBSL had decided that the IT Department should be headed by a person with the relevant background. This was a turning point because, subsequently, those who headed the IT Department were selected with the necessary background and this changed the way in which IT was handled at CBSL.

This is another deep wound in the country’s memory. Due to the deadly LTTE bomb blast on 31st January 1996 at CBSL, many were killed, many were injured and many lost their eyesight completely. It also completely destroyed CBSL’s computer systems. The building which housed the IBM 4300 computer system and the data entry section were completely destroyed. Everything was lost. But in the IT Department, no lives were lost although many were injured. And it was Ms. Nayeni Fernando who gave leadership to the critical task of rebuilding the computer systems and the EPF (Employees’ Provident Fund) application which is essential to all employees in the country.

CBSL was responsible for running the EPF system of the country. There were no online backups then – there were data tapes stored in the training school in Rajagiriya. The main task that Ms. Nayeni Fernando faced was to ensure that the EPF system was functional again. Therefore, an AS/400 computer system was ordered immediately and Mr. NM Jayasekera, Deputy Director, CBSL was assigned the task of redesigning the system but with no documentation. He had to use his knowledge and he, together with Ms. Janaki Mampitiya and Mr. CB Pathberiya were responsible for the coding for implementing the application on the new computer system.

There were those who helped out during this difficult time – used computer systems identical to the ones destroyed were made available by IBM due to an initiative by Mr. John Fernando, who was CEO of IBM. Prof. VK Samaranayake helped by providing space at the University of Colombo to set up this computer system. This was used to process the raw data tapes and have the data ready for migration to the new application in the new IBM AS 400 computer system. And by August 1996 the new AS 400 system purchased with an USAID grant was installed at CBSL’s temporary location at the World Trade Center with the application running the EPF system of the country. Ms. Nayeni Fernando and the team even succeeded in giving online EPF balances to the public at Sri Lanka’s 50th Independence Day celebrations at BMICH.

Some projects were not implemented

The Council for Information Technology (CINTEC), the then apex Government body on ICT, in 1994, formed the Financial Sector Working Committee and one of its main tasks was to set up a common ATM switch to route transactions within the country without going through an external switch. Ms. Nayeni Fernando was responsible for coordinating this project. This would have saved foreign exchange for the country, but some banks did not agree to participate as they did not want to lose their competitive advantage at the time, preventing the implementation of this valuable project. A common ATM switch was installed in the country many years later.

It was believed that with the transition from 1999 to 2000 all programs would malfunction if the two-digit date format were used. Ms. Nayeni Fernando and the team adjusted their programs in 1997/98, but this had become a worldwide issue and with the advice of the Governor of CBSL, a Y2K Committee was formed under Prof. VK Samaranayake. Ms. Fernando was in charge of checking Y2K preparedness for the Financial Sector. Despite the fuss, Sri Lanka navigated successfully into the year 2000 with no known issue. Soon after that Ms. Nayeni Fernando reached the age at which she could opt for retirement and decided to do so having completed 20 years at the Central Bank.

Shifting to the private sector

After working at the Bank of Ceylon as an IT Consultant for two years, Ms. Nayeni Fernando worked at Informatics (Pvt) Ltd, in the area of IT education. A key project in which Ms. Fernando was involved, was the IT training that Informatics carried out for the employees of the Divisional Secretariats in the Matale District. This was one of the pilot projects which the Information and Communication Technology Agency (ICTA) of Sri Lanka implemented at ICTA’s inception in 2003. ICTA awarded this project to Informatics’ Future Kids division. A key feature was that after the training the employees carried back two PCs to each Divisional Secretariat loaded with sample applications for use in their day to day work. They had a PC and an application which they could put into productive use. Ms. Nayeni Fernando then moved to BC Computers (Pvt) Ltd. This company intended to bid for a project on implementing a cheque clearing system in Bangladesh. Although BC Computers was not successful in the bid, Ms. Fernando was invited to work in Bangladesh as the onsite Project Manager to install an automated cheque clearing system. Bangladesh Bank successfully implemented automated cheque clearing, carried out end to end electronically on the 10th of October 2010 and implemented an Electronic Funds Transfer System soon after.

CSSL was inaugurated in 1976. Ms. Nayeni Fernando was a Founder Member of this Professional Association, was Vice President for three years and was then awarded the status of Fellow which is an honor awarded by CSSL to senior members who have made a significant contribution to CSSL and Sri Lanka’s IT industry. CSSL gained membership of SEARCC in 1986. Ms. Nayeni Fernando has gained much through her association with CSSL.

Ms. Nayeni Fernando has reached significant milestones in her career, and “glass ceilings” have not prevented her from reaching the upper rungs, in gaining recognition and making a positive difference solely through education, capability, efficiency, hard work and a willingness to appreciate and learn from others. 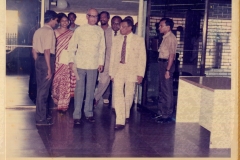 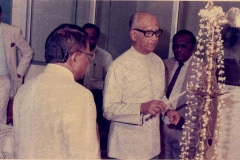 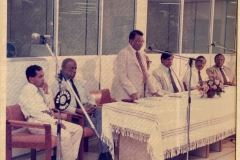 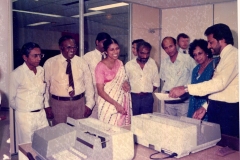 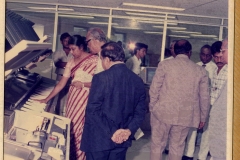 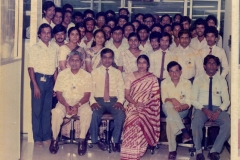 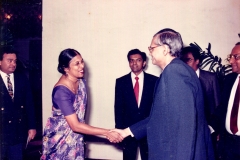 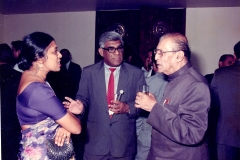 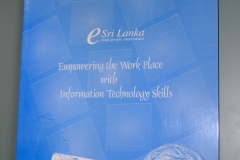 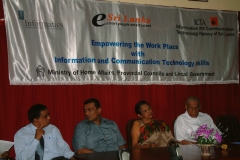