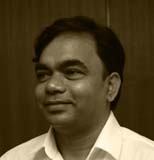 Mr. S. Shanmugarajah (Shan) is an experienced IT professional who has been practicing in the software industry for the past 19 years. He specializes in mobile technology, on which he has focused for the past decade. He is thoroughly conversant in telecommunication software development with skills in Android, iOS .NET, Java and middleware. He holds a Bachelor of Engineering Degree in Computer Science, from the Bharathidasan University, Trichy, India. He is presently the CEO and Chief Architect of mBrain Technologies.

Shan was an External Consultant in ICT in Local Languages at the ICT Agency (ICTA) of Sri Lanka. He was instrumental in developing keyboard drivers for Windows, which enabled typing in accordance to the Sri Lanka Sinhala Standard SLS 1134 : 2004 and to the Sri Lanka Tamil Standard SLS 1326 : 2008. These were available from the ICTA website and enabled numerous users over a long period of time, to use ICT in Sinhala and Tamil aligned to standards. He has also worked as an External Consultant to Microsoft Sri Lanka. Shan has also been, through ICTA, a Juror of mBillionth Award Grand Jury at the South Asian Mobile Conference in 2010/2011. At Microimage, which he joined in 1998, Shan was instrumental in developing keyboard drivers for typing in Sinhala.

Mr. S. Shanmugarajah (Shan) was interested in Engineering from the time he was a very young boy. When he was in Grade 9 at school, his school set up a computer lab. Shan thought then that he could use this lab and get into the computing arena. But unfortunately, the teacher who was in charge of computing was not very conversant on the subject. The teacher had been given only a weeks’ training on Computer Science before he started teaching. Shan, who had developed a liking towards this area, started trying to figure out himself the way in which a computer works. Later, Shan was reading for an Engineering Degree in Computer Science at the Bharathidasan University in Trichy, India, and there, at the computer lab Shan again came across an impediment in his quest for computing knowledge. The lab attendant at the University controlled the computer lab and the access given to students. This was 1993. Computers were expensive and rarely did anyone have a home computer. But Shan asked his father whether a computer could be purchased. The first computer he received was an i386 machine which he set up in his room and he started coding extensively with Visual Basic. In 1997, Shan was awarded a Degree in Computer Science and returned to Sri Lanka.

In Sri Lanka, Mr. Shanmugarajah joined the Company MicroImage. The first task at this Company which Shan was given was to write a keyboard driver in Sinhala. Shan was not conversant with what a keyboard driver was nor did he have conversance on the popular keyboard layouts. Then a friend Hiran, informed him that according to the keyboard layout which was used extensively, when the English letter J is pressed the resultant Sinhala letter should be ව, and that the letter S is for the Sinhala alapilla and when both are pressed the result should be වි.

People were using Nokia phones and initially it was not possible to introduce external applications into Nokia phones. In 2003 Shan was in India and there he saw a friend using a Nokia 8910i, on which there was a Java symbol. He borrowed this phone with the intention of enabling it with Sinhala and Tamil. He was trying to get the වි which was the very first thing he had done when he started out on the area of Local Languages. But there were no Sinhala fonts in the mobile phone. So, Shan created images for the ව and for the alapillla and somehow managed to get the වි on the mobile phone. He states that it looked like a වි! Another difficulty which Shan encountered on mobile devices was the issue of there being 3 characters for each key. But he overcame the challenges and managed to get the entire Sinhala character set on to the keys. Thereafter, Nokia started producing Java phones which were called J2mv phones. Mr. Shanmugarajah then informed his CEO, Mr. Harsha Purasinghe that it was possible to use Sinhala on mobiles and he was extremely pleased with this. They visited Mr. Hans Wijayasuriya at Dialog who suggested that this should be launched. It was launched around 2004 or 2005. This was immensely popular and there were many users downloading the package. MicroImage charged Rs. 150/00 for the software. But this was not Unicode compliant. They had imposed Sinhala images on top of the English font. He had also developed input systems for Android and iOS mobile devices.

In 2004, Mr. Shanmugarajah attended a workshop organized by the ICT Agency (ICTA) of Sri Lanka on the Unicode standard. Then he realized that there was a unique code for every character and that the glyphs for all the Sinhala characters could be brought in. In 2004, after the Tsunami devastation Microsoft gave a Sinhala enablement pack for Windows XP and Office 2003 to enable communication, disseminate information and for the creation of lists (of missing persons) in Sinhala. At this time Prof. Gihan Dias was heading the Local Languages Initiative at ICTA and ICTA contracted with Shan on developing a Sinhala keyboard driver aligned to the ICT Sinhala standard SLS 1134 : 2004. This was made available on the ICTA website. Concurrently, ICTA held comprehensive awareness sessions on the benefits of adhering to the Unicode standard targeted to font developers and to general users including users in Government organizations. From this point onwards, people started using ICT in Unicode compliant local languages. This was a breakthrough.

Shan did not stop here. He continued the development of keyboard input systems for other languages such as Hindi, Malayalam, Telugu, Kannada and Dhivehi. Shan states that we are now in an era in which we can type seamlessly without worrying about selecting local language fonts.
Finally, Shan says that he used to be a lecturer on Android programming and application security at IIT and CICRA. He teaches the younger generation to think out of the box, innovate and co-relate real-life experiences with technology. He says that young people now mostly develop something which has already been developed. This creates competition but Shan emphasizes that this would not result in innovation. His advice to the younger generation is to address a problem and try to solve it so that people and the country-at-large are benefited. What is developed, he says, should ultimately contribute towards uplifting peoples’ lives.