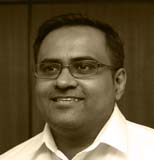 Mr. Balachandran Gnanasekaraiyer has been responsible for key developments in the arena of ICT in Local Languages. As a Consultant to the Information and Communication Technology Agency (ICTA) of Sri Lanka, in 2006 he commenced working on a Tamil keyboard layout to be standardized. He later worked on developing the draft Tamil ICT standard which encompassed the keyboard layout for Tamil with keying-in sequences, encoding for Tamil characters aligned to the Unicode standard and a Collation Sequence for Tamil. These were included in the draft standard which ICTA proposed to the Sri Lanka Standards Institution, which resulted in the Tamil ICT standard SLS 1326 : 2008.

Mr. Balachandran later transitioned to the area of cyber-security. He is a Certified Ethical Hacker and a certified Computer Hacking Forensic Investigator. Mr. Balachandran was the first employee of the Bank CSIRT. He is at present Head of Cyber-Security at Dialog Axiata.

Mr. Balachandran was awarded a Bachelor of Information Technology (Honors) degree from Charles Sturt University, Australia. His Master’s Degree included components of both ICT and language due to his interest in ICT and the Tamil language. The research for his degree comprised working on a scheme to transliterate names in Tamil to names in Sinhala.

Mr. Balachandran Gnanasekaraiyer’s interest in ICT began when he was a young boy; both his parents were writers. His father, in the late 1990s used a computer to write books in Tamil. He typed in Tamil and got the books published. Consequently, even as a schoolboy, Mr. Balachandran (Bala) developed an interest in how Tamil characters are inserted into a computer, and the way in which the Tamil letters looked when printed. Bala used to assist his father in typing and typesetting his books. During this period legacy fonts were used. Bala and his father had about two legacy fonts which they used in getting their books published. Through this work Bala developed an interest in ICT.

Mr. Balachandran was interested in Tamil literature, therefore he returned to Sri Lanka. He then commenced working as a Systems Engineer at the Department of Computer Science and Engineering, University of Moratuwa.
Professor Gihan Dias, during this period was setting up TechCERT, he was CEO of the LK Domain Registry and a Senior Lecturer at the University of Moratuwa. Bala commenced working on his Master’s Degree under Prof. Gihan Dias. The area he selected for his degree had components of both ICT and language; the research comprised working on a scheme to transliterate names in Tamil to names in Sinhala. For this work Mr. Balachandran researched on the phonology and grammar of the Tamil and Sinhala languages.

The Information and Communication Technology Agency (ICTA) of Sri Lanka, during this period was working on the Tamil keyboard layout with a view to standardizing. ICTA, under its Local Languages Initiative, headed by Prof. Gihan Dias had striven to introduce the keyboard layout Tamil99, which was deemed a highly logical layout, to users in Sri Lanka. The layout was rejected by most users who wanted a keyboard layout based on the “type-as-you-write” method. Prof. Gihan Dias noted the interest that Bala had in languages and technology and therefore introduced him to ICTA. The Sinhala keyboard layout had been finalized and included in the Sri Lanka Standard Sinhala Character Code for Information Interchange, SLS 1134 : 2004. This was being used in Government organizations. The ICTA team that was implementing the Lanka Government Network urgently wanted to know what the standard Tamil keyboard layout was. Consequently, ICTA contracted with Mr. Balachandran on developing the Tamil keyboard layout and on working on a proposal which would lead to a Tamil ICT standard.

Thereafter, Mr. Balachandran, with the LLWG, worked on developing a draft Tamil ICT standard. This was proposed to the Sri Lanka Standards institution (SLSI) and after public consultation SLSI adopted it as Sri Lanka Standard Tamil Character Code for Information Interchange, SLS 1326 : 2008. The standard consisted of;

a) The keyboard layout with keying-in sequences.
b) Encoding aligned to the Unicode standard and to ISO/IEC 10646.
c) The Tamil collation sequence.

In addition to these key outcomes. Mr. Balachandran also worked with ICTA on developing a Tamil font. ICTA needed to get a Unicode Tamil font developed. The font was to be a “serious” font which was acceptable and could be used in Government organizations. Each glyph, with the modifiers had to be of acceptable standard and had to be defined carefully.

Therefore, Mr. Balachandran collected Tamil texts of the past 100 years with several texts for each decade. How each character looked like was studied carefully, the shape for each character was drawn and the font was developed. Consequently, ICTA published the font SriTamil.

Mr. Balachandran also states that the area of Tamil fractions and symbols is not given any prominence now. He explains that there are specific symbols to represent words such as “debit”, “credit”, as-above” etc. He explains that there are about 60 such symbols which had been used during the past 300 years. Due to the development of technologies such as typewriters and computers, these symbols could not be included in these writing schemes. Mr. Balachandran was of the view that these should be given their due place because these had been used for several centuries. Mr. Balachandran had worked for about 5 years and collected between 70 to 80 such fractions and symbols. The objective was that these should be included in the Unicode standard. There were people from other countries working on these. Consequently, a collective proposal from several counties had been submitted through India, and finally in 2019, these Tamil fractions and symbols were included in the Unicode standard.
Mr. Balachandran had also worked with ICTA on the Tamil Sri Lanka locale. ICTA emailed the Unicode Consortium and managed to get a locale Tamil-Sri Lanka, Ta_LK, included in its Common Locale Data Repository (CLDR). Thereafter, the information relating to the locale Ta_LK was discussed extensively, agreed on and uploaded on to the CLDR.

Mr. Balachandran was also part of the team which worked on Internationalized Domain Names (IDNs). Through this work a Top-Level Domain Name in Tamil equivalent to the .LK was defined, discussed and accepted through a public consultation mechanism.

All this work on Local Languages with ICTA had been carried out between the years 2006 and 2012. Mr. Balachandran states that most of the fundamental requirements have been met and that the standards are in place and the results are being used by Government organizations, various communities in Sri Lanka and other users.

In addition to the work on Local Languages, Mr. Balachandran has also been involved in the area Cyber-Security. Mr. Balachandran explains that he joined the University of Moratuwa in 2006 and during this period Prof. Gihan Dias was setting up TechCERT. By 2009, cyber-security had become a key area and Mr. Balachandran managed to get certified as an Ethical Hacker. Later in 2011, he was certified as a Computer Hacking Forensic Investigator. Thereafter, Mr. Balachandran transitioned into the Cyber-Security area. During this period the Central Bank of Sri Lanka was in the process of setting up a Bank CSIRT (Computer Security Incident Response Team) with Sri Lanka CERT. This CSIRT was to be specific for financial institutions. Consequently, on 30th June 2014, the Bank CSIRT was launched. This was the first South Asian CSIRT specific to the financial sector. Mr. Balachandran was recruited as the first employee of the Bank CSIRT. He says that this was a good opportunity for him.

Mr. Balachandran finally states that he is happy that he was a part of this journey. He is at present Head of Cyber-Security at Dialog Axiata. He is deeply thankful towards everyone who helped him reach these key milestones.