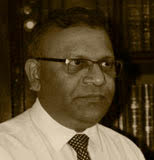 During Mr. Amaradasa’s tenure, ANCL introduced a classified advertising system with sorting in newspapers for Sinhala and English. This was the very first time that newspapers in Sri Lanka introduced a classified advertising system sorting. The ANCL newspapers Daily News and the Sunday Observer were published online by Lanka Internet for the first time on 4th September 1995. These were the first newspapers in South Asia to be published online. Since then ANCL has uninterruptedly published newspapers online. The Sinhala Unicode font Dinamina was also developed by ANCL and was given to ICTA and is offered free to users.

Mr. Abhaya Amaradasa was educated at Royal College, Colombo, and is the General Manager of Associated Newspapers of Ceylon Ltd (ANCL), which is well known throughout Sri Lanka as “Lakehouse”. ANCL was incorporated in 1926 and thereby is the oldest publication company in Sri Lanka. Mr. Amaradasa’s interest in printing started while he was still a schoolboy. He had developed a keen interest when seeing printing equipment in large organizations and also when going through printed leaflets, pamphlets and magazines etc. This made him decide that he should enter the printing industry. He had the opportunity of learning printing in school which led him to apply for a position at ANCL. He joined ANCL in December 1980. During this period ANCL was introducing graphic repro photography. Mr. Amaradasa was in the first batch of trainees, who were trained overseas. Consequently, Mr. Amaradasa perused a career in Graphic Art and Printing Technology. Mr. Amaradasa has followed Tertiary Courses in Printing Technology covering Off-set Lithograph, Design for Print, Costing and Estimation and Graphic Repro photography, with first division Gold Awards. He has been awarded a higher Diploma in Printing Technology and Management with a merit distinction and Silver Award. He has also served as a visiting Lecturer in Digital Reprographics in the advanced Diploma in Printing Technology.

In addition, Mr. Amaradasa has been awarded a Diploma in Business Administration by the National Institute of Business Management with a Merit Award and he has followed numerous Regional Management workshops pertaining to Graphic Arts Technology Management, General Management and Corporate Planning. He has also represented ANCL in eight Printing conventions and Techno update sessions held in Düsseldorf, Germany since 1986. He has represented ANCL in six printing conventions and workshops in related to IPEX Printing Conventions held in Birmingham, UK since 1988.

Mr. Amaradasa recalls that in 1995 a breakthrough innovation had been introduced with regard to the ANCL newspapers – the ANCL newspapers Daily News and the Sunday Observer were published online by Lanka Internet for the first time on 4th September 1995. This was the outcome of a proposal made by Lanka Internet Services to the then Chairman of ANCL, Mr. Lakshman Jayawardena to introduce Internet editions of the Daily News and the Sunday Observer. These were the first newspapers in South Asia to be published online. Since then ANCL has uninterruptedly published newspapers online with the introduction of many value-additions, new applications and improvements.

There was ascertained a need thereafter to introduce Sinhala content onto the Local Area Network and cater to the editorial workflow. This had already been carried out with regard to English content. To carry this out, there emerged the necessity for a standard Sinhala keyboard and to move away from the AMICUS system towards open systems. At this period, ANCL, through Mr. Anura Tissera started collaborating with the work being done on enabling the use of ICT in Sinhala and Tamil at the Council for Information Technology (CINTEC), and later at CINTEC’s successor the ICT Agenc-y of Sri Lanka (ICTA). Mr. Amaradasa recalls that leadership for the local languages initiative had originally been given by Prof VK Samaranayake at CINTEC and later by Prof. Gihan Dias at ICTA.

Other stakeholders had been the University of Colombo School of Computing, the University of Moratuwa, the Sri Lanka Standards Institution etc. ANCL had developed the Sinhala Unicode font Dinamina and had handed it over to ICTA. ICTA had used this in developing the draft Sri Lanka Standard Sinhala Character Code for Information Interchange, SLS 1134 : 2004 which was standardized by SLSI. The font Dinamina is used in ANCL’s Sinhala newspaper Dinamina and is offered free to users. The Dinamina newspaper had first been published in 1914 by Mr. HS Perera and had been bought over by ANCL’s founders in 1918.

In 2007 Sinhala editorial workflow had been introduced to input stories, coverages and news items by reporters and also to give access to provincial correspondents via services that were available from news agencies AFP (Agence France-Presse), Reuters, AP (the Associated Press) and PTI (Press Trust of India) etc. Thus, news flow was streaming through to sub-editors, news editors, and to desk heads for final editing. Thereafter the pages were handled by specialists – graphic designers – and from this point onwards it was sent straight to the plate. Thus three stages of printing were reduced to one process by sending from the computer to the plate. In addition to the workflow, an archival system with an asset management system was also introduced. The result was that every photograph, every cartoon, every caricature, every image, every news item and every page is automatically archived into an asset management system. Consequently, in the future, if it is necessary to retrieve any item, all that is necessary would be to search and it could be retrieved from the terminals of the editorial personnel.

This process had been happening in the production flow for over 15 years. A separate ERP system had also been introduced in the advertising and accounting sections. At present, the advertising ERP is being reconnected with the editorial workflow systems and within six months, the systems will be interlinked and dashboards would give the information required by the management for review. ANCL has been innovative in computerizing its processes over the years.