Dr. Ruvan Weerasinghe has a first degree in Mathematics and Statistics from the University of Colombo, Sri Lanka. He ventured into the field of IT and Computer Science through postgraduate study in the UK. Since then Dr. Weerasinghe has been involved in many facets of the ICT industry. He started with small scale projects and feasibility studies for State Sector organizations.

Dr. Ruvan Weerasinghe has been part of the pioneering bodies which were instrumental in the introduction of the Internet to Sri Lanka; through both the Lanka Educational and Research Network (LEARN) and also the Internet Committee of the Council for Information Technology (CINTEC) which was the apex body on ICT in Sri Lanka until 2003. Dr. Ruvan Weerasinghe also served as an instructor for the Internet Society which was involved in training network personnel in developing countries, from 1996 to 2000. He has also been closely involved in many aspects of the e-Sri Lanka Development Program which was implemented by the Information and Communication Technology Agency of Sri Lanka (ICTA). Dr. Weerasinghe is a very active member of ICTA’s Local Language Working Group.

As an academic he has taught students from various backgrounds in all aspects of IT and Computer Science. His research interests have been in various aspects of Human Language Processing in computers, particularly in Statistical and Corpus-based approaches and in Machine Translations.

After working briefly at the Rubber Research Institute, Dr. Weerasinghe returned to the University of Colombo and joined the newly formed Institute of Computer Technology (ICT) which was later renamed the University of Colombo School of Computing (UCSC). Another person who joined the ICT at that time was Dr. Ajith Madurapperuma. This institute was headed by Prof. VK Samaranayake and was set up with a grant from the JICA (Japan International Cooperation Agency). The Japanese personnel who were at ICT were focused on mainframe computers with dumb terminals. Dr. Weerasinghe and Dr. Madurapperuma questioned this and developed a course on personal computing which they included in the curriculum. The outcome of this venture was that Dr. Weerasinghe became interested in teaching.

Later, in 1989 he joined the Cardiff University to read for a Master’s degree in computing and a PhD degree in natural language processing.

When he returned to the University in 1994 he realized that everything was so different – there were labs with individual computers and there was a lab with a Novell NetWare network. Together with Dr. Nalin Ranasinghe, he connected a lab which had Sun microcomputers to the lab with Novell NetWare with TCP/IP which allowed communication between disparate systems. Around this time Prof. Gihan Dias, Dr. Nimal Ratnayake, Dr. Prabath Samaratunge, Mr. Athula Herath and others had set up SL Net which later became LaCNet, a communication network for email. Prof. Abhaya Induruwa had also managed to set up an inter-University network which first connected the University of Moratuwa, the University of Colombo and the Open University. This was LEARN – Lanka Educational, Academic and Research Network.

Dr. Weerasinghe states that he was involved in many areas in addition to teaching, mainly due to the consultancies undertaken by the Institute of Computer Technology. He was involved in industry bodies such as FITIS (Federation of Information Technology Industry of Sri Lanka) and later he was involved with the team which drafted the Roadmap for the e-Sri Lanka Development Program, implemented by the ICT Agency of Sri Lanka (ICTA). Dr. Weerasinghe was a member of the committee negotiating for Sri Lanka with the World Bank. He states that initially this venture was highly private sector driven, and he says he ascertained two big non-negotiable gaps in the Roadmap; one was the fact that it did not include any reference to Open Source and the second lacuna was that there was nothing on language. Dr. Weerasinghe had ensured that the Roadmap included paragraphs on these. He emphasizes the fact that the document had to mention the use of Sinhala and Tamil, which is also included in the e-Government policy. This policy was approved by Cabinet several years later. The latter document which was an initiative of ICTA, states that all Government websites should be in Sinhala, Tamil and English.

Dr. Weerasinghe was a member of the Boards for deploying two funds under ICTA; one fund was to develop the private sector and the other was to develop grass-roots communities. Dr. Weerasinghe on retrospect states that a key lesson learnt from implementing the e-Sri Lanka Development Program was the way in which to plan very big development programs; he says that in spite of everything, the e-Sri Lanka Development Program was a well planned, well thought of, well executed program and nobody can critique it to say that there was any wastage.

Dr. Weerasinghe states that he is involved with SLASSCOM (Sri Lanka Association of Software and Service Companies) and is also a member of the IT Sectoral Committee of the Sri Lanka Standards Institution (SLSI). These involvements, he states, has given him broad appreciation of the industry.

Localization is another key area in which Dr. Weerasinghe has been involved. His interest in IT and his interest in imparting knowledge to others made him realize that many in Sri Lanka were reluctant to use a computer because they thought that it was necessary to be thoroughly conversant in English to do so. This is because earlier, the only language in which a computer could be used was English. Therefore Dr. Weerasinghe became interested in the work that Prof. Samaranayake had commenced through a small group at the Council for Information Technology (CINTEC). This Committee was trying to ascertain the basic infrastructure needed to use a computer in Sinhala and Tamil. India was addressing the issue of using Tamil, but to enable using a computer in Sinhala was entirely this Committee’s mandate. When CINTEC closed and ICTA was established and commenced operations in July 2003, this work was taken over by ICTA’s Local Language Working Group (LLWG) which Dr. Weerasinghe states is functional even at present. The LLWG has worked with SLSI, with the Unicode Consortium, and with major vendors such as Microsoft, Google and ORACLE. He states that the fact that Prof. Gihan Dias joined ICTA during his Sabbatical leave had greatly helped this initiative. He states that all the basic requirements for enabling Sinhala and Tamil in computers, such as Unicode conformant fonts, local language keyboards, a standard collation sequence, developing ICT Sinhala glossaries etc., have all been addressed satisfactorily and now other issues such as Sinhala optical character recognition and text to speech in Sinhala and Tamil, are being addressed. This is evinced by the hundreds and thousands of people who are using Sinhala and Tamil and from the hundreds of local language websites and blogs that have come up. Two community groups that sprung up around this venture are the “Sinhala Unicode Group” and the “Sinhala Blog Sansadaya”. He says this achievement of which we are reaping the benefits today, was made with all the stakeholders and partners including the Sri Lanka Standards Institution.

The aim of the Language Technology Resource Lab of the UCSC is to make the use of computers in local languages so transparent so that users will not have to think of technology.

In conclusion Dr. Weerasinghe states that he is still passionate about teaching and it is really necessary to empower the younger generations. He says that those who achieve and reach milestones, need not necessarily be from Colombo. They can be from other areas of the country and can inculcate Sri Lanka’s culture, and way of looking at things into what they do, so that Sri Lanka does not need to necessarily use technology that others have developed, but can invent technologies that are relevant to Sri Lanka. He says that young people should not just follow but should be inspired to lead. Dr. Weerasinghe states that he will remain in teaching and will try to inspire young people who may normally think that they are at a disadvantage. Dr. Ruvan Weerasinghe’s query is “How can we make them think that they are capable of making and impact and change the way in which technology is applied in life” 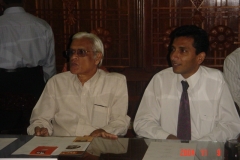