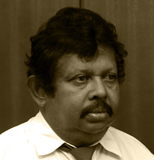 Mr. Siri Samarakkody was educated at Royal College Colombo. He was the Secretary of the Radio Club. This is where he first evinced interest in electronics. He has been awarded an Honors Degree in Electrical and Electronic Engineering, from the UK. He was a pioneer in bringing mobile telephony to Sri Lanka – he was the founder CEO of Celltel Lanka where he was involved in initial license negotiation and technical aspects. He was also involved in setting up Lanka Internet, which started the first commercial website in Sri Lanka, www.lanka.net.

Mr. Siri Samarakkody’s interest in ICT and electronics commenced during his schooldays at Royal College, Colombo. During the period 1972/73, he was the Secretary of the school Radio Club and members of the Radio Club built equipment such as amplifiers, and an amateur radio. All the electronic equipment that they built were based on thermionic valves. Transistors were not ubiquitous in Sri Lanka then. Members of the Radio Club taught other students the basics of electronics. Mr. Samarakkody, as a schoolboy was also involved in building the public address system for the school.

After completing his school education, he went to the UK, where he was awarded an Honors degree in Electrical and Electronic Engineering. He worked for a while at IBM Labs in the UK. Here, Mr. Samarakkody was introduced to microprocessors. This was, to him, a revelation. They were working with large computers such as the IBM System/370. He reminisces that the instruction set was a little card and each instruction had to be keyed in by hand; there were no proper instruction assemblers etc. Mr. Samarakkody returned to Sri Lanka in 1980. With other investors he obtained the agency for Data General and BBC microcomputers. They supplied the first computers to Universities, such as the Universities of Colombo, Jaffna and many others. The main memory of the first computer was 512 K, the hard disk capacity was about 10 MB removable and 10 MB fixed. This was a revolutionary step and all the Universities started using computers.

At the same time, Mr. Samarakkody commenced manufacturing TV antenna with a friend, an engineer, but they stopped this due to the competition. They then went on to manufacture electronic components. They continued this for a while and by about 1994, there were about 1000 employees. They had a factory on Homagama and received the Presidential Export Award twice.

Meanwhile, Mr. Samarakkody was exploring the possibility of cellular telephony. The Sri Lanka Telecom (SLT) Network during this period was a monopoly and was heavily congested. It was difficult to get a phone call, especially during peak hours. Mr. Samarakkody lived in Mt. Lavinia and sometimes, he says, there wasn’t even a dial tone. Mr. Samarakkody read about mobile technology and then he met others who were also interested in launching a cellular network. He then started Celltell, Sri Lanka’s first mobile telephone Company around 1987, with three other local investors – viz. Mr. Menikdiwela, Mr. Arthur Senananayake and Mr. Aruna Siriwardena – and a Swedish Company. Mr. Samarakkody was the CEO. He was responsible for the technical aspects, planning the network and also the initial licensing. During this period there was no Telecommunications Regulatory Commission. The licensing had to be done through the Department of Telecommunications. The Director of Telecommunications was Mr. K. K. Gunawardena, who assisted Mr. Samarakkody and his team greatly in obtaining the license, (which was issued on a sheet of A4 paper!) with advice and sorting out technical factors. This initial license which was issued to Celltel by the Department of Telecommunications, permitted only for voice.

Mr. Samarakkody and the team managed to get the first cellular network in Sri Lanka started with four base stations. Handsets were expensive, around USD 700/- during this period. With import duty, it was around LKR 100,000/-. During the first year there were about 1000 subscribers. Then suddenly, prices started decreasing and other operators came in. The Celltel network was Analog, and Dialog came in with GSM and the market changed. Thereafter, Mr. Samarakkody resigned from the post of CEO of Celltel but continued to be a shareholder.

The first-generation network that Celltel had could not carry data. This came only after GSM was introduced, initially by Dialog and thereafter by all the other operators. Another significant happening in the 1980s was the convergence of voice and data. Both became almost the same. 2G mobile telephony was introduced and thereafter 3G and 4G. Mr. Samarakkody believes that carriers will phase out 3G soon, since 3G has no space. Everyone is awaiting 5G. Convergence has occurred fully, he says, and now voice is carried as data.

The Internet was now starting – in the mid-1990s, Mr. Samarakkody and colleagues who were in the USA – Dr. Prabath Samaratunge, Prof. Kulathilake – set up Lanka Internet. Originally, they only had a 64K line from SLT and a modem bank. The modems were 2.4k and all they could do then was send emails. Then proficient people such as Mr. Channa De Silva, who is now at LankaClear, joined Lanka Internet, and they started the first commercial website in Sri Lanka, www.lanka.net. Lanka Internet also set up the first online newspapers in Sri Lanka; the Daily News and the Sunday Observer. Lanka Internet also started the first online radio station, TNL Radio. This was a monopoly for a while until more licenses wee issued. Mr. Samarakkody sold his shares and went onto other initiatives. He regrets that it could not be carried forward, but he says that Lanka Internet was only for data whereas other operators, due to convergence were merging data and voice, so Lanka Internet was left out.

Finally, Mr. Samarakkody states that he was involved in both electronic component manufacturing, as well as in ICT. At present, the electronic manufacturing sector, of which he was a pioneer in the 1980s has grown. There are several multinational companies too which are operating in the Free Trade Zones. The future, he says, is with 5G, which will open up new opportunities, with IOT and other new technologies coming in.