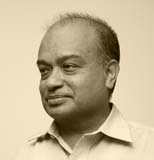 When Niranjan joined Metropolitan, Metropolitan was the monopoly supplier on banking equipment; ledger cards and printers. In 1982, the Bank of Ceylon (BOC) decided to automate. In early 1983, there was a BOC Tender calling for the supply of a computer with a ledger card printer.

Metropolitan offered for the Tender a Canon AS-100 computer with a Fujitsu ledger card printer. Mr. Niranjan De Silva and his team managed to win this Tender for Metropolitan although they were given only a week’s notice by BOC for a demonstration of the solution they were offering. This was an initial breakthrough and this was also an initial step in computerizing BOC and other banks.

Another challenging project on which Mr. Niranjan De Silva embarked was the project “Online Billing System” on electricity billing. Through this project, the process through which the electricity bill was made available to a consumer of the Lanka Electricity Company Private Ltd (LECO) was changed so that a consumer received the bill when the meter reader visited the consumer’s house instead of the bill being posted, which was done previously. Mr. Niranjan De Silva and his team won this Tender for Metropolitan.

Mr. Niranjan De Silva has also been the Secretary to the Computer Society of Sri Lanka (CSSL), he was the Treasurer, Vice President and he was also the President of CSSL. One of the most challenging tasks in which Niranjan was involved under CSSL was organizing the South East Asia Regional Computer Confederation (SEARCC) in 1995.

Mr. Niranjan De Silva states that he was happy to have been part of the Metropolitan Group, because it was a Company that focused on new technology and new solutions. Niranjan is working at present with a Japanese Company, Adam Innovations, and has set up the first international IT Park in Japan, where a few Sri Lankan Companies are already operating.

Mr. Niranjan De Silva was educated at Trinity College, Kandy, Sri Lanka. His first degree is in Electronics Engineering from the UK and he holds an MBA degree from the Postgraduate Institute of Management of the University of Sri Jayewardenepura. Niranjan returned to Sri Lanka after his being awarded his degree in the UK, because he says “there is no other place like your mother-land”.

After returning to Sri Lanka, Mr. Niranjan De Silva states that he was initially not sure which field to enter; he had a liking for the IT area but he was open to other options. He applied to many organizations, received many offers, some were from IT Companies and others were from non-IT Companies. In February 1981 he joined Metropolitan as an Engineer. This Company was then called Metropolitan Agencies. The strength of the Company at this time was in office equipment. Niranjan selected this Company mainly because he had been requested to set up a computer company within the Group.

When Niranjan joined Metropolitan, the Company was the monopoly supplier on banking equipment; namely, ledger cards and printers. During this period, a customer’s account details used to be on a ledger card. Niranjan stresses on the advances made in this area, because today, with the press of a button, a bank can access a customer’s account details in Sri Lanka and internationally, instantly.

Metropolitan had a machine called Robotron, imported from East Germany, for which Metropolitan was the sole supplier. The only competitor was NCR Mechanical.

In 1982, the Bank of Ceylon (BOC) realized that internationally, banks were moving towards automation and that the concept of using ledger cards manually may soon become obsolete. There were two very capable people at BOC who were spearheading these plans; these were late Dr. R.B. Ekanayake and Mr. Janaka De Silva. Dr. R.B. Ekanayake was Head of IT and Mr. Janaka De Silva was Head of Strategy at BOC. They had realized that BOC could not be automated immediately. If this were done there would have been resistance from the Unions. If BOC introduced IT systems, the Union members envisaged that they would lose their “over-time payments”. The bank used to be closed to customers at 2.00 p.m., and from then until 6.00 or 7.00 p.m., the ledger cards were updated and documentation was carried out manually. This was a big issue; on one hand the bank had to automate, and on the other hand there was huge resistance from the Unions.

As a compromise, Dr. R.B. Ekanayake’s and Mr. Janaka De Silva’s plan was to automate in stages. Consequently, in early 1983, BOC published a Tender calling for the supply of a computer with a ledger card printer. They wanted all the records to be in a computer but they wanted the details to be updated through a ledger card printer to assure Union members that although IT was being introduced, ledger cards would still be used.

Electricity Billing
Another challenging project on which Mr. Niranjan De Silva embarked was the project on electricity billing. According to the process which the Ceylon Electricity Board (CEB) carried out during this period, the electricity meter reader used to visit the consumer’s house, note the meter reading, go back to his office and thereafter the bill was printed and posted to the consumer. This cycle was very long. Sometimes people used to complain that the electricity bills had not been received. Then Lanka Electricity Company (LECO) wanted to change this process. According to the new system that they wanted to introduce, the meter reader would visit the consumer’s house, note the meter reading, compare with the previous reading, calculate and hand over the bill to the consumer straight away. A Tender was called for this project. After evaluation, Metropolitan won the Tender for LECO’s “Online Billing System”. Today both Ceylon Electricity Board (CEB) and LECO carry out “on the spot” bill calculations, through which the bill is handed over to the consumer at the time at which the meter reading is taken. This has resulted in huge improvements in cashflow. This was a very challenging project which Niranjan and his team undertook and the results are apparent even today, with regard to all utility bills including water bills. In the process of implementing this project Mr. Niranjan De Silva met Mr. Yasa Karunaratne because Mr. Karunaratne was a Consultant to LECO. They became good friends and consequently Mr. Yasa Karunaratne convinced Mr. Niranjan De Silva that he should join the Computer Society of Sri Lanka (CSSL).

Computer Society of Sri Lanka
Mr. Niranjan De Silva thereafter served on the CSSL Council and held many posts there; he was Secretary to CSSL, then he was the Treasurer, he was Vice President and he was also the President of CSSL after Mr. Lal Chandranath. Niranjan is really happy about joining CSSL because he had the opportunity of working with professionals.

At this point he emphasizes the importance of networking in developing one’s career; he advises the younger generation that it is not possible to proceed up the career ladder by oneself, it is necessary to network and belong to professional bodies such as CSSL, the Australian Computer Society (ACS) and the British Computer Society (BCS).

One of the most challenging tasks in which Niranjan was involved under CSSL was organizing the South East Asia Regional Computer Confederation (SEARCC) conference in 1995. Mr. Yasa Karunaratne wanted to organize the best SEARCC Conference ever. Mr. Niranjan De Silva states that Mr. Karunaratne had “big dreams and big visons”, and somehow, he achieved these. The way in which SEARCC should be hosted was discussed at a CSSL Council meeting and a recommendation was made that a promotional troupe from Sri Lanka should visit Pakistan. The SEARCC Conference was being held in Pakistan in the year before it was to be held in Sri Lanka. But even in 1995, Niranjan says that taking a promotional troupe to Pakistan would have cost about Rs. 300,000.00. Niranjan then came up with an innovative idea; he stated that the promotion should be carried out by the CSSL members who would be visiting Pakistan. This caused consternation among members at first, but later the Executive Council unanimously approved Niranjan’s plan. Niranjan recalls that some of the members who participated were Dr. R.B. Ekanayake, Ms. Nayeni Fernando, Mr. Kanishka Sugathadasa, Mr. Yasa Karunaratne, Mr. Peter De Almeida and Prof. Abhaya Induruwa. They all performed at the Jinnah stadium in Karachchi, Pakistan and this promotional program is still rated as one of the best SEARCC promotional programs. The person who had encouraged Mr. Niranjan De Silva to do this was Mr. Yasa Karunaratne. Mr. Niranjan De Silva states that he has deep gratitude towards Mr. Yasa Karunaratne for all the encouragement that Niranjan received.

With reference to technology Mr. Niranjan De Silva states that at the time he joined Metropolitan in 1981, there were no PCs, but there was a small Sinclair computer and after this there were Radio Shack computers, and Metropolitan thereafter offered Canon computers. When Canon computers were going out of the market Mr. Niranjan De Silva, with the support of the Chairman of Metropolitan, Mr. J.J. Ambani, managed to get ACER computers to Sri Lanka. This was about 25 years ago. After about four years ACER was one of the top three brands in Sri Lanka.

Mr. Niranjan De Silva states that he was happy to have been part of the Metropolitan Group, because it was a Company that always focused on new technology and new solutions. This is very necessary he says as concisely “what got you here, might not get you there!”. It is necessary to innovate, think of new and better ways of doing things and exploiting new technology to make Sri Lanka a better place. Niranjan says that Sri Lanka has really good talent. He is working at present with a Japanese Company, Adam Innovations, and has set up the first international IT Park in Japan, where a few Sri Lankan Companies are already operating. Finally, Mr. Niranjan De Silva states that everyone should be more optimistic, think positive, think big and move ahead fast.