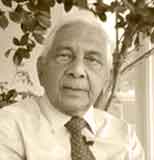 Professor Sam Karunaratne recollects a period more than half a century ago – i.e., the 1960s – when computerization commenced in Sri Lanka, then known as Ceylon.  He recalls that the Government in the late 1960s decided to allocate a computer to a State sector organization.  Dr. A.N.S. Kulasinghe, a civil engineer and the Founder Chairman of the State Engineering Corporation (SEC) indicated that he was in dire need of a computer.   Consequently, SEC was allocated slightly over LKR 2 million to purchase a computer.   Prof. Sam Karunaratne who was then at the University of California, Berkely, USA, returned to Sri Lanka in April 1967, and joined SEC.   SEC initially tried to purchase an IBM System/360 computer, but they then realized that this computer was not yet sold in Sri Lanka. Therefore, SEC purchased an ICL 1900 series mainframe computer which had facilities for carrying out scientific and engineering work.  This was the first computer in Sri Lanka.  The computer was ordered but there was a lapse of several months before delivery. SEC then recruited computer personnel; systems analysts, programmers, computer operators and data entry operators.  The four systems analysts were Dr. R.B. Ekanayake, Mr. Ranjan Perera, Mr. S.J. Silva and another.

Computerizing the payroll of SEC

The SEC team decided to write the computer programs before the computer was delivered. Dr. Kulasinghe’s instructions was to “Use it profitably”. Therefore, after discussions with the management, Professor Karunaratne and the team decided to computerize the payroll of SEC. This was not an easy task at that time; SEC had over 15,000 employees scattered over 50 sites all over the island. The computer was delivered. It was large; it had a large central processing unit and four large tape drives. There were no graphical user interfaces during this period. There was a line printer. It was possible to print 1500 lines per minute with this printer. There was only one font and there were only capital letters. This was the State Engineering Corporation’s first effort with its first computer, which was the first computer in Sri Lanka.

Thereafter, the team decided to write software that would impact every household in Sri Lanka; they decided to computerize the results of the G.C.E. Ordinary Level examinations. This was 1968. Professor Karunaratne recalls that during this period about 360,000 candidates sat for the O’ Level exams. The exams were held in December each year and the results were released usually after a period of six months. Therefore, the SEC team wrote a computer program for releasing the O’ Level exam results. Consequently, the results were released 13 days after the exam, and this initiative was a resounding success. Thereafter, this initiative was extended to release the results of the G.C.E. A’ Level exams.

Professor Karunaratne reminisces that Dr. A.N.S. Kulasinghe was an exemplary civil engineer with novel ideas. Dr. Kulasinghe decided to build a Chaithya at Kalutara by the river (Kalu Ganga). Chaithyas were brick structures, but Dr. Kulasinghe decided to build a Chaithya with a shell structure, thus enabling devotees to go inside. From outside, it was to look like a normal Chaithya. Designing a shell structure was not easy. During this period there was no software available for such a task and the SEC team had to develop its own algorithms on the way this task was to be carried out. Dr. Kulasinghe ensured that a smaller stupa was built by the side of the main stupa to check out the stresses and the strains. Dr. Karunaratne and the team used simultaneous linear equations to do this – there were 1080 simultaneous linear equations to be solved. Solving this would take many hours. Therefore, they ordered a stand-by generator, in case there were power cuts. Solving these equations took seven hours. The stresses and the strains in the model Chaithya related fairly closely with the calculated values for the main stupa. This, Professor Karunaratne states, was a true achievement at that time – i.e., during the period 1968/1969.

Book on the language FORTRAN

Professor Karunaratne recalls that engineers during this period widely used the language Fortran (Formula Translation). He therefore wrote a book titled “FORTRAN Programming” which indicated how to use this language for various applications including designing of shell structures and many other scientific applications. One thousand bools were published and in five years all 1000 books were sold. Dr. Karunaratne states that this indicates that at least 1000 people were interested in the language FORTRAN.

Dr. Lal Jayawardene, economist, and a team inquired from SEC whether econometric analysis could be carried out to maximize the output of the country with minimum inputs, using the SEC computer. Dr. Karunaratne and the team studied this and ascertained that this could be done using linear programming. The SEC computer had linear programming software inbuilt. Therefore, it was not necessary for the SEC team to write the software that was needed. They agreed to do this and this venture was also carried out successfully to benefit the country. This was in 1969.

A biometrician from the Coconut Research Institute required the yield in a particular coconut estate predicted using the computer. There were eight variables comprising the rain pattern before the crop – the rain before the crop for eight weeks. He had data for the previous 20 years – rainfall and output. The SEC team wrote a program – using multi-regression analysis – and were able to inform the CRI what the crop would be for a given rain pattern.

Earlier the output from the Universities were graduates in Computer Engineering or in Computer Science and Engineering. The number of graduates was very small and not sufficient for the growing needs of the country. The maximum number of graduates was approximately 100 per year. Therefore, Professor Karunaratne states “we spearheaded something that would produce 1000 graduates per year!”. Consequently, the SLIIT was established in 1999. Professor Karunaratne was the Founder Chairman and Dr. Lalith Gamage was the Managing Director. Prof. Karunaratne worked for 15 years as the Chairman and then retired at age 80. He states that at present “SLIIT has gone far beyond my expectations”.