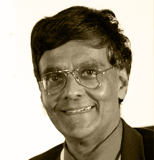 Prof. Munasinghe was Founder Chairman of the Computer and Information Technology Council of Sri Lanka (CINTEC), established in 1984 as the apex government body on Computers and IT. He was a key figure in establishing CINTEC, chairing the Presidential Committee on Computer Policy (COMPOL, 1982-83), and helping to draft Act No.10 of 1984, which created CINTEC. He was also active in related areas, as Senior Energy Advisor to President Jayewardene (1982-86), member of the Presidential Committee on Telecommunications Policy (1984-85), Founding Governor of Arthur Clarke Centre for Modern Technology, and Founding Board member of Natural Resources, Energy and Science Authority (NARESA) of Sri Lanka.

He earned post-graduate degrees in engineering, physics and development economics from Cambridge University (UK), Massachusetts Institute of Tech. (USA), and McGill University and Concordia University (Canada). Prof. Munasinghe has also received several honorary doctorates (honoris causa), and is recognized as a world expert on sustainable development, climate change, energy, economics, environment and ICT policy. He has authored over 100 books and 350 technical papers, and won many international prizes for research – most notably sharing the 2007 Nobel Prize for Peace, as Vice Chair, UN Intergovernmental Panel on Climate Change. He is fellow of several international Academies of Science, and serves on the editorial boards of about 15 professional journals.

He is presently Founder Chairman of Munasinghe Institute for Development (MIND), Colombo, Sri Lanka, and Chairman, President’s Expert Committee preparing the Sustainable Sri Lanka 2030 Vision strategic plan. During 50 years of distinguished public service, his career highlights include serving as Advisor to United States President’s Council on Environmental Quality, and Senior Advisor/Manager, World Bank. He has had direct field experience in projects implemented in over 90 countries, and taught as Visiting Professor at many leading universities worldwide. His work has directly contributed to two major achievements in global policy in 2015 – sustainable development goals (SDG) endorsed by the UN General Assembly, and Paris Climate Agreement at COP21.

It was almost a chance event that drew the attention of former President J.R. Jayewardene to computers. In 1982, Prof. Mohan Munasinghe, in the course of his work as Senior Energy Advisor to the President of Sri Lanka, tabled a 3-page memo at his first weekly meeting. The President on seeing it had requested a ½ page memo with the recommendations summarized in just two lines. Prof. Munasinghe, promptly edited the document using his Tandy Radio Shack TRS 80 computer and his EPSON dot matrix printer (both very new to Sri Lanka at the time), and returned with the document in the style and format required by the President, within ½ hour.

Impressed with this outcome, the President had said “we should know more about this technology” and had requested a report. Prof. Munasinghe’s brief report resulted in the setting up of the Special Presidential Committee on National Computer Policy, and thereby launched Government intervention in the area of ICT.

The Committee on National Computer Policy (COMPOL) guidelines was set up at the request of the H.E the President, by the Natural Resources, Energy and Science Authority (NARESA). It comprised eminent members with extensive experience and expertise. Prof. Mohan Munasinghe was the Chair, while the other members were Prof. VK Samaranayake, Dr. RB Ekanayake, Dr. NWN Jayasiri, Prof. S Karunaratne and Dr. Ajit Kanagasundram. Mr. Yapa from NARESA was the Secretary.

The COMPOL report was completed in just four months, due to the high professional quality of the Committee and the excellent teamwork. The resultant policy document was approved by the Cabinet in 1983, and it has stood the test of time. For over 20 years, this was the only Cabinet approved ICT policy in Sri Lanka, until many years later, in 2009, when the e-Government policy drafted by ICTA was approved by the Cabinet.

Prof. Munasinghe stressed that this very first computer policy was not a “controlling” policy. Rather, the emphasis was on facilitation and the use of ICT for development – i.e. to use computer technology in all its aspects, for the benefit of the people of Sri Lanka, and to further the socio-economic development of the nation. First the developmental needs of the country were addressed and then the way in which technology could be used for development was ascertained. The general philosophy underlying the National Computer Policy Guidelines was specifically stated as “to foster initiative and creativity in both public and private sectors, and to coordinate, encourage and guide these efforts rather than to control and regulate them”.

In retrospect, this dovetails almost exactly with the vision of the e-Sri Lanka Development Project, implemented by the Information and Communication Technology Agency of Sri Lanka (ICTA) 20 years later; the vision was to “take the benefits of ICT to every village, every business and to improve the way Government thinks and works”.

No other country at that time had such a well-defined computer policy as COMPOL. The needs of the country were addressed from a developmental perspective. There was to be a Board or a Council to advise the Minister in charge on the formulation of National policy for supporting development, to improve the quality of life of the people and to meet the challenges of technological change.

The focus was on advancing technological skills, creating a facilitating and enabling environment; on establishing professional standards in the sector; and the far-sighted objective, even then, of exporting computer related services. These same objectives were also encompassed within the e-Sri Lanka Development Program implemented by ICTA, 20 years later.

The Computer and Information Technology Act no. 10 of 1984 and setting up CINTEC

Drawing on COMPOL report, Prof. Munasinghe personally helped the Legal Draftsman’s Office to prepare the Computer and Information Technology Act no. 10 of 1984. This Act was broadly focused on the formulation and implementation of policy for supporting national development. Some of its key objectives were to advise the Minister on the formulation and implementation of a national policy on computers and IT and also to promote, facilitate and assist the use of and application of computer and IT in Sri Lanka with a view to improving the quality of life of its people and enabling Sri Lanka to acquire the necessary capability to meet the change of technological change. Prof. Munasinghe also served on the Presidential Committee on Telecommunications Policy , and incorporated relevant ideas from that exercise into the CINTEC Act.

The Computer and Information Technology Council of Sri Lanka (CINTEC), was established in 1984 as the apex Government body on computers and IT. There were three elements which comprised CINTEC; firstly, there was the Board or the Council to advise the President or the Minister in charge. Prof. Mohan Munasinghe was the founder Chairman. The other members of the first Council – recommended by Prof. Munasinghe — were Prof. V.K. Samaranayake, (University of Colombo and next Chairman of CINTEC), Dr. R.B. Ekanayake (President of the Computer Society of Sri Lanka), Prof. Abhaya Induruwa (University of Moratuwa), Dr. N.W.N. Jayasiri (National Institute of Business Management (NIBM), Mr. C. Gunasingham (Additional Secretary, Presidential Secretariat), Mr. K.K. Gunawardena (Director of Telecommunications), Mr. Akiel Mohamed (Director of National Planning), Mr. G. Kumaratunga (Commissioner of Customs), and Prof. J. Gunawardena (University of Peradeniya).The professionalism and broad coverage of the Board (which included senior persons from government, academia and civil society) helped to ensure its success.

CINTEC functioned under the President from its commencement. This gave CINTEC the clout that was necessary for implementing policy and the relevant IT related decisions throughout the Government organizations. President Jayewardene also relied on Prof. Munasinghe to help him articulate and implement public policy on ICT for development – establishing Sri Lanka as a leader among developing nations. For example, in his famous address at the convocation ceremony of the University of Sri Jayewardenepura in 1984, the President stated: “Science and Technology must be an essential part of development. It has to be part of upbringing from the cradle….we are in the process of establishing a computer and information technology council…..the microchip is today the carrier of knowledge….the need to leapfrog into the future is paramount in the life of a developing nation….Time is of the essence. The time is now, and we must grasp it. You, young men and women of the future will be the beneficiaries.”

The CINTEC Secretariat supported the work of the Council. There were several Working Committees such as the Committee on Law and Computers, the Committee on Data Communication, the Committee on Public Sector Computerization and the Education Committee. Committee members were drawn from the Government sector, from the academia, the private sector and comprised those with expertise in these fields.

Then there were the other elements with which CINTEC had ties such as the Centers of Excellence – viz., the Universities of Moratuwa, Colombo and Peradeniya and NIBM for academic work and for skill development. CINTEC also supported the Computer Society of Sri Lanka (CSSL), a professional body which had just been established. And CINTEC also interacted with focal nodes in key Ministries, which served as the points through which computerization would be introduced into Government organizations. These links facilitated the promotion and use of computers.

Since its inception in 1984, CINTEC became a role model for developing countries and a prime example of how computer driven development could take place in a developing country. Many leading articles were published in Sri Lanka and internationally . Two premier world science academies, The United States National Academy of Sciences in Washington DC, and Third World Academy of Science (TWAS) in Trieste, recognized the path breaking work in Sri Lanka. They collaborated closely with CINTEC during this early period, conducting several international seminars and publishing books jointly (CINTEC-USNAS, 1985 and CINTEC-TWAS, 1989 ).

Prof. Munasinghe stressed that implementation of technology should not be pursued as an end in itself, but rather it is necessary to first commence with a development challenge and thereafter the appropriate technology should be selected and applied. Government, he states, should play an enabling, facilitating and guiding role, while business is the main driver of innovation and technology development, and academia develops the human resource capacity and addresses skill development issues. Furthermore, Prof. Munasinghe stresses that goal no. 9 of the Sustainable Development Goals – Industry, Innovation and Infrastructure – can be a prime driving force for ICT-led sustainable development.

Besides his pioneering work in ICT, Prof. Munasinghe has won accolades for his exceptional contributions towards the areas of environment, energy, climate change and sustainable development. He further explains that today, humankind is using more than 1½ times the sustainable capacity of this planet. And ICT, because it improves the efficiency of resource use, can help reduce this burden on the planet. ICT can also help the poor lift themselves out of poverty, achieve a more equitable distribution of wealth; provide information and livelihoods; and facilitate good governance, improve accountability and transparency. ICT should not be perceived as just a useful technology but as a major thrust area for transforming society and making development more sustainable. 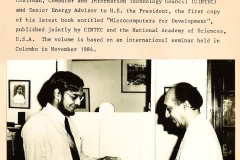