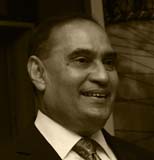 After being awarded his PhD he returned to the University of Moratuwa where he was a Senior Lecturer. He was keen on promoting the ICT sector. The University appointed him the Director of the Computing Center which gave him the opportunity of working with Government organizations such as the Export Development Board (EDB), Board of Investment (BOI) and private sector IT Companies.

Prof. Gamage has contributed immensely towards promoting the IT industry and has also served the government of Sri Lanka in various capacities. He has served as the Chairman of Arthur C. Clarke Institute for Modern Technologies (ACCIMT), and has been on the Board of the Sri Lanka Computer Emergency Readiness Team | Coordination Center (SLCERT|CC). Prof. Lalith Gamage was instrumental in setting up the “TradeNetSL”, the trade information network of the Export Development Board. Local companies also had the opportunity to transact through the e-Commerce platform, “CyberTrader” which they launched and is the first e-Commerce platform in the country.

Professor Lalith Gamage played a key role in developing the ICT strategy under the ICT Cluster of the USAID sponsored competitiveness initiative, which led towards the development of the e-Sri Lanka Development Program and setting up of the Information and Communication Technology Agency (ICTA) of Sri Lanka.

One of his key achievements is setting up of the Sri Lanka Institute of Information Technology (SLIIT) in 1999; Prof. Lalith Gamage realized that there was a dearth of IT Professionals of good quality in the country and the number of IT graduates being produced by State Universities was not sufficient to meet the needs of the growing IT industry. This led to the setting up of the purpose-built Malabe campus which has been producing over 1000 IT graduates each year during the past years. SLIIT, which had initially offered only IT based programs, later commenced offering degree programs on computer systems and networking, programs on information systems, cyber security programs and software engineering degree programs. SLIIT also commenced offering Master’s degree programs and continues to grow with the industry.

Professor Gamage states that graduates, and not specifically ICT graduates but any graduate should not merely concentrate on passing exams. They should be able to apply the knowledge acquired in solving real-world problems; understand and analyze the nature of these problems, be able to work with teams. These attributes would result in a good professional.

Prof. Lalith Gamage is the President / CEO of the Sri Lanka Institute of Information Technology (SLIIT). Prof. Lalith Gamage’s intention when he was young was to be an Engineer. Information Technology was not popular then. As a schoolboy he had been keen on electronics and had built one-transistor radios, graphic equalizers and also disco lights, which were popular at the time. As a youth, Lalith Gamage had a keen interest in electronics. But he knew he would have to work really hard to enter the University of Moratuwa. Studying hard yielded results and he was selected to the Department of Electronics and Telecommunication Engineering, at the University of Moratuwa. Prof. Lalith Gamage states that this changed his life.

Thereafter he was awarded a scholarship from the British Government to read for a Master’s Degree in IT, at the University of Leicester. Lalith Gamage returned to Sri Lanka, and around this time there was a Japanese grant given to enhance the facilities at the Department of Computer Science and Engineering. Thereafter, he had the opportunity to read for a PhD in Mechatronic Engineering at the University of British Colombia. Since Mechatronics is a multidisciplinary field, encompassing areas such as electrical and mechanical engineering, telecommunications, electronics and IT, Lalith Gamage really entered the ICT arena through this program.

After being awarded his PhD he returned to the University of Moratuwa where he was now a Senior Lecturer. He was keen on promoting the ICT sector. The University appointed him the Director of the Computing Center which gave him the opportunity of working with Government organizations such as the Export Development Board (EDB), Board of Investment (BOI) and private sector IT Companies.

Prof. Lalith Gamage realized that IT Companies were struggling to find IT Professionals of good quality. During this period, State Universities were not producing the required numbers of IT graduates, nor were they producing sufficient numbers of graduates who had studied Computer Science as a subject. The number of IT graduates being produces was not sufficient to meet the demand of the IT industry which was growing fast. Therefore, Prof. Gamage wrote a paper on setting up an Institute within the University of Moratuwa, which was well received but funding had been an issue. The Government opined that this would place a heavy burden on the consolidated fund.

Thereafter, in 1999, Prof. Lalith Gamage and a group of professionals decided to establish the Sri Lanka Institute of Information Technology (SLIIT) and enroll students. SLIIT commenced operations at the 16th floor of the BOC Merchant Tower. SLIIT at this time did not have degree-awarding status. Therefore, they called for applications for students to enroll for the Diploma Program to be conducted by SLIIT. Over 3000 applications were received out of which 395 students were enrolled. This was to be a fee-levying institution. Prof. Lalith Gamage and the team envisaged that there would be a big demand so they leased another floor at the BOC Merchant Tower. The following year, the popularity of SLIIT had grown and SLIIT received 6,300 applications and 600 students were enrolled. During this period, the Mahapola Trust Fund agreed to provide funds and the Malabe land where the campus has been set up. This was a purpose-built campus which was completed in 2002 with the required facilities. Thereafter, it was possible to enroll more than 1000 students, which meant that there have been more than 1000 IT graduates each year from SLIIT during the past years. The availability of these graduates has positively impacted the growth of the industry. Prof. Gamage states that IT is the 5th largest export earner for the country and SLIIT has provided the largest number of graduates for the industry.

As stated previously, when Prof. Gamage was working as the Director of the Computing Services Center at the University of Moratuwa, he had the opportunity of interacting with the EDB. He realized then that EDB was not really using technology to promote products and services. Prof. Gamage scrutinized this issue and decided to set up “TradeNetSL”, the trade information network of the EDB, which used technology to profile products, markets, profile local companies particularly SMEs and promote them through the Internet. Local companies also had the opportunity to transact through this platform, through “CyberTrade” which they launched and which is the first e-Commerce platform in the country. This was started by Prof. Gamage and one of his students. They had been given a small room to carry this out, but no funds. So, they used an old server and Linux software which they downloaded overnight on a slow Internet connection. Ultimately, this has benefited thousands of exporters who found markets through this e-Commerce platform which they could not find before. This eventually became one of the largest divisions at EDB.

Prof. Gamage states that SLIIT worked closely with the industry. The IT industry during this period was nascent and needed a boost. Human Resources (HR) was only one aspect. Therefore, a clear 3-phase strategy was developed under the ICT Cluster of the USAID sponsored competitiveness initiative. The first part of the strategy was factor based and the factors that were identified were; HR, infrastructure, the business environment, the legal environment, the marketing and promotion environment, and branding. Prof. Lalith Gamage with a team undertook the HR area and there were other teams working on the other areas. The competitiveness was to come from the availability and the costs of these factors. Prof. Gamage recalls that during this period people used to complain of not having enough bandwidth, but this is not an issue now. The second part of the strategy was an efficiency-based strategy and the way in which processes could be improved.

Prof. Gamage recalls that when the ICT Strategy was developed and handed over to Hon. Milinda Moragoda, who was the Minister in charge of ICT, the Minister had said “I want to convert this to a bankable document so that we can get funds from the World Bank”. Thereafter, they had worked with teams from the World Bank, specifically with Dr. Nagy Hanna on structuring the strategy into the e-Sri Lanka Development Program, on ICT led development of the country, which was funded by the World Bank. Prof. Lalith Gamage is happy to state that this gave rise to the Information and Communication Technology Agency (ICTA) of Sri Lanka, which was the implementing agency of the e-Sri Lanka Development Program. Prof. Gamage stated that ICTA has carried out a tremendous amount of work in the ICT industry area.

They had also wanted industry associations to come out as part of this strategy. Prof. Gamage states everyone later got together to set up SLASCOMM. The birth place of SLASCOMM, he states is ICTA.
Finally, he states that ICT is all-pervading – it is required, for example, in offices, in homes, in cars, for navigation and everywhere else. Therefore, large numbers of ICT professionals are needed to support these developments.

Therefore, his advice to any graduate, not particularly an ICT graduate but any graduate, is that the goal of the undergraduate in a University should not be merely to pass exams. When entering a University, people are transformed from being schoolchildren to professionals. In becoming a professional, acquiring knowledge is important but one should be able to apply the knowledge acquired to solve real-world problems; be able to understand and analyze the nature of these problems, and if the knowledge is not sufficient, he or she should be able to research to find out what others have done, and have the ability to work with teams, sometimes be able to lead teams. These are attributes, Prof. Gamage states, that an undergraduate should acquire and these would result in a good professional. Ultimately, what is needed is to acquire these skills and have the ability to come up with innovative solutions so that one can contribute towards the betterment of society.