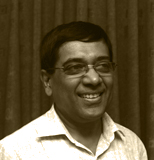 Mr. Pushpananda Ekanayaka has been designing letters of the Sinhala script, in different shapes from the time he was a young child. The first Sinhala font Mr. Ekanayaka designed was Malithi. In 1998, Mr. Ekanayaka released 10 fonts which he had developed, but these did not include a text typeface font. There was a necessity for a text font and consequently Mr. Ekanayake designed the hugely popular Sinhala ASCII font FM Abhaya. Thereafter, it was necessary to design and develop Sinhala fonts of various styles intended for different purposes. Consequently, he designed and developed 12 Sinhala fonts of different designs.

Mr. Ekanayake later developed fonts compliant to the international encoding standard Unicode. One such font that he designed is the MalithiWeb, a light font mainly intended to be used in websites. Mr. Ekanayaka gave this font to ICTA, to be given freely to users. Mr. Ekanayaka set up the Company “The FontMaster”, through which he continued to design and develop Sinhala fonts. Mr. Ekanayaka explains that publishing software not fully supporting Sinhala is an impediment, especially towards adherence to the Unicode standard.

When Mr. Pushpananda Ekanayaka commenced employment in 1981, at Phoenix, an Advertising Agency in Colombo, he was mainly involved in calligraphy. Thereafter, in 1982, he joined Sri Lanka Rupavahini Corporation where his key task was designing Sinhala fonts. Computers became prevalent in Sri Lanka in the 1990s. Mr. Ekanayaka states that there were defects in the Sinhala characters which were used in computers at this stage, and these were not aesthetically correct because the Sinhala characters were mainly being designed by technical people and not by designers. Therefore, around 1994, Mr. Ekanayaka decided to purchase a computer and commenced designing fonts.

The first Sinhala font Mr. Ekanayaka designed was the font Malithi. He worked meticulously on this font to ensure the correct rounded shape intrinsic to Sinhala letters. In 1998, Mr. Ekanayaka released 10 fonts which he had developed. But there was no text typeface font – i.e. an easy-to-read font intended for large documents – included in these fonts. A case in point is the Latin font Times New Roman. Mr. Pushpananda Ekanayaka realized that there was a necessity for a text font and set about designing one. He then studied several Sinhala fonts which had evolved over the years, from the period when lead printing block letters were used, until the 1990s and decided to design a suitable font. This initiative resulted in the hugely popular Sinhala ASCII font FM Abhaya. It ultimately became the de facto standard font used in State sector organizations, among the publishing industry and for undergraduates’ theses.

Thereafter, it was necessary to design and develop Sinhala fonts of various styles with unique characteristics and personalities intended for different purposes. Consequently, Mr. Pushpananda Ekanayaka designed and developed 12 Sinhala fonts of different designs – e.g. one was a font which resembled the Sinhala letters used in old Ola leaf (පුස්කොළ පොත්) documents, another denoted a large, solid appearance, yet another font could be used for artistic work etc.

With this development, there were Sinhala fonts which could be used for different purposes and for different topics. But Mr. Ekanayaka states that this was not sufficient. Therefore, he continues to design Sinhala fonts of different styles. He further explains that worldwide classifications of fonts include serif fonts used mostly for body copy, with thickening and with small lines attached to the main line. Sans serif typefaces are more modern, with a single line throughout and have a comparatively plain appearance. He further explains that the font Abhaya is a serif font and the aesthetically pleasing font Bindumathie is also a serif font, with relatively thin lines. The font Samantha is a slightly thicker version of this font. The fonts Ganganee and Basuru are sans serif fonts. There were many other stylized fonts, such as Gurulugomi, which resembled Sinhala letters in Ola leaf documents, fonts which could be used for invitations to auspicious events such as weddings, fonts for the nameboard of a hardware shop etc. Mr. Ekanayaka designed fonts with square shapes, such as the font Gemunu, and then there were queries on why he did this, because Sinhala letters have round shapes. Later, a similar font Dawasa (දවස) became highly popular. He explains that with square fonts, it is possible to have more letters on a smaller space.

When Mr. Pushpananda Ekanayaka commenced developing fonts to be used in computers, he used the font editor Fontographer, version 3.0. There were no CDs during this period. The software was made available in floppy discs. At present the font editor FontLab is available. Mr. Ekanayaka further states that in earlier times he developed ASCII fonts, but later he developed fonts compliant to the international encoding standard Unicode. One such font that he designed is the MalithiWeb, a light font mainly intended to be used in websites. Prof. Gihan Dias, when he was a Program Director at the Information and Communication Technology Agency (ICTA) of Sri Lanka, set the rules for this font. Mr. Ekanayaka gave this font to ICTA, to be given freely to users. ICTA consequently made it available on its website, www.icta.lk. It is at present available on www.language.lk, the site on local languages developed and maintained by the LK Domain Registry. Mr. Ekanayaka set up the Company “The FontMaster”, through which he continued to design and develop Sinhala fonts.

At present Mr. Pushpananda Ekanayaka states that despite certain technical drawbacks that he has come across, he is developing Unicode Sinhala fonts and, in this area, he is striving for excellence.