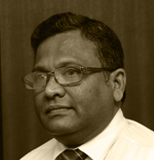 Mr. Niel Gunadasa is at present the Director of Education, (SLEAS-I) of the Data Management Branch, of the Ministry of Education, Sri Lanka. One of his key responsibilities is implementing the National Education Management Information System (NEMIS), which addresses the preparation of data and information on the education system. Mr. Gunadasa was the Director of Education at the ICT Branch of the Ministry of Education from 2006 to 2016, where he was responsible for the implementation of many key projects which impacted the entire country and made a positive change in the ICT education arena.

During Mr. Niel Gunadasa’s tenure at the ICT Branch at the Ministry of Education, many milestones were reached, which impacted the entire country. When Mr. Gunadasa joined the ICT branch, he ascertained that ICT education should be implemented in a sustainable manner with Sri Lankan teachers dedicated to teaching in this area.

Introduction of the subject ICT into General Education

The policy decision on the inclusion IT as a subject in the secondary school curriculum proved to be a milestone of great importance reached by the Government with regard to the General Education System. Accordingly, the General Information Technology (GIT) for G.C.E Advanced Level (for Grade 12) was introduced in 2004. This was the very first way in which ICT was formally introduced into General Education.

Thereafter, the Government obtained funds from foreign donor agencies to uplift the physical ICT resources in schools. As a result, ICT was introduced in 2006 as an optional subject for students in Grades 10 and 11. In both cases, ICT was taught by teachers who were appointed to teach other subjects. They were trained through the National Institute of Education (NIE). In addition, the teachers themselves obtained relevant training due to their interest and dedication to the subject. Mr. Gunadasa reiterates that those teachers should be given recognition and respect for the great service they have rendered.

One of the key initiatives that was implemented was the establishment of hardware and network solutions teams at national level for the maintenance of computer labs in schools in 2008. Parallel to this program, hardware and network solutions teams were implemented at zonal level and in schools. The annual hardware maintenance program was conducted at the end of the second term (during the school vacation) each year island-wide, including the Delft-Island and Jaffna. About 250 teachers were selected from around the island for training. The Universities of Colombo, Peradeniya, Ruhuna, Sabaragamuwa and Kelaniya provided practical training for the selected teachers. The teachers continue to provide support to schools at school-level and zonal-level. This was a highly successful program.

One Laptop Per Child (OLPC)

Under the OLPC program the Ministry of Education, in 2010, distributed laptops to primary school children in 17 schools. Initially 9 schools – one from each province – were selected and the other schools were selected later. Over 1500 items of content aligned to the school syllabi of Grades 1 to 5 were installed in these laptops. The Operating System was converted to Sinhala and Tamil with assistance from the University of Colombo School of Computing (UCSC). The laptops and the content were eagerly and readily appreciated by the children who started using these enthusiastically. Children from rural areas who had never before used a computer commenced using the laptops competently. This was a successful project. Mr. Gunadasa and his team noticed that children who had been afraid of Mathematics, for example, managed to get over this fear.

Thereafter, in 2010, Mr. Niel Gunadasa had extensive discussions with his team and consequently decided to establish the Learning Content Management System, the e-portal “e-thaksalawa”, which is the official e-learning platform of the Ministry of Education. This was one of the most effective initiatives implemented during his tenure. This project is still running with teachers’ assistance. This was an entirely Sri Lankan project run by Sri Lankan teachers. Mr. Gunadasa strongly believes through his experience that miracles can be achieved if Sri Lankan teachers are empowered.

This National e-learning portal for the General Education system was the winner of the e-Swabhimani best e-content award in 2014 under “e-Learning and Education” category. e-Swabhimani is an award given by the Information and Communication Technology Agency (ICTA) of Sri Lanka for innovative content or software under different categories. e-thaksalawa was also the winner of the “Manthan Award” South Asia and Asia Pacific Region Best e-Content competition-2014 under the “e-Learning and Education” category, in New Delhi, India where the cost-effective model of the system was greatly appreciated. Mr. Gunadasa was determined to continue e-thaksalawa as a sustainable model and to enhance the e-learning culture in Sri Lanka. Therefore, he proposed and commenced the preliminary processes (obtaining funds and approvals) to establish the National Content Development Center (NCDC) with assistance of foreign funds through the Ministry of Finance. NCDC will be the incubator for creating Sri Lankan e-learning content for future generations in the general education system.

Mr. Gunadasa initiated the introduction of Open Source into general education system; the Ministry of Education had been spending large amounts of money for licensed software. It was decided to develop a customized Operating System aligned to the education system. Support was rendered by the Open Source community in Sri Lanka. The Operating System Ubuntu 12.4 was customized with inclusion of educational material and this OS was named “Isuru Linux”. This project too was a success and most schools used this for teaching and learning.

During this period Mr. Gunadasa and his team, together with the Computer Society of Sri Lanka (CSSL) and the Federation of the IT Industry Sri Lanka (FITIS) initiated software competitions to select students and teachers. The “National Level School ICT Championship Competition” for the ICT subject was initiated as an official activity of the ICT branch of the Ministry of Education, in 2009. Through these competitions, students were sent to Asia Pacific ICT Alliance (APICTA) and other international competitions where they won medals.

Mr. Gunadasa and his team forged international partnerships, particularly with South Korea, which greatly supported Sri Lanka’s educational initiatives. A Memorandum of Understanding was signed with the Gwangju Metropolitan Office of Education in the Republic of Korea. This initiative was fully funded by the Republic of Korea. Through this program initially only 12 teachers were trained for five days. Subsequently the number of teachers being trained was increased to 25. This was a good opportunity for Sri Lankan teachers. They were able to gain the latest knowledge on ICT Education since the Republic of Korea was a country at the very apex in the arena of ICT education. Towards the latter part of the program, from 2009 onwards, each teacher who was trained was assigned a laptop which they could bring back to Sri Lanka. The teachers were also given the opportunity of visiting high-tech industries through which they could be conversant on the way in which ICT was heading at a global level.

In 2014 the first fully-fledged SMART Classroom was established at Pitipana Mahinda Rajapaksa College. It was funded totally through a donation from the Republic of Korea (South Korea) due to the partnership maintained on the area of education. Mr. Gunadasa emphasizes great appreciation of the assistance rendered by the Government of South Korea, Gwangju Metropolitan Office of Education, the local counterparts, local expertise made available and also the entire community of school teachers in Sri Lanka.

Starting something new is a big challenge. This was apparent to Mr. Gunadasa and his team when they strove to take ICT to rural areas. Sometimes there were problems due to not having electricity, there was a dearth of ICT facilities and there was the issue of not having a sufficient number of teachers for these schools. Therefore, a group of teachers who had interest in ICT was selected and these dedicated teachers were provided continuous training through the National Institute of Education (NIE).

The Ministry of Education signed a MoU with the University of Vocational Technology (UNIVOTEC) through which teachers who did not have degrees in ICT could follow ICT degree programs at UNIVOTEC. The teachers were given full-time study leave. This was a successful program through which ICT teachers were able to improve their knowledge on key subjects such as networking, multimedia and programming. ICT graduates were recruited in 2012 with all the interviews being conducted and the placements being made under the leadership of the ICT Branch of the Ministry of Education. This resulted in a reasonable number of ICT graduates being available within the education system. Schools, thereafter, adapted accordingly; Mr. Gunadasa reminisces that some schools even developed software for ringing the school bell. Thus, with time, ICT had become a popular subject.

But despite all these developments, there were challenges in taking ICT to remote areas. Therefore, Computer Resource Centers were established in each zone. These were set up to provide training and assistance to schools in each zone and this was yet another successful venture. Another initiative that was taken was in partnership with the Information and Communication Technology Agency (ICTA) of Sri Lanka from 2009 to 2013 through which ICTA prepared relevant supplementary content for school teachers in rural areas.

Another key initiative was to make students aware of opportunities available through the IT Business Process Outsourcing (IT/BPO) sector. Awareness programs were held through the Ministry in key areas such as Batticaloa, Kandy, Galle, Ratnapura, Jaffna, Kurunegala and Colombo. The outcome was that students gained knowledge IT/BPO and the way in which they could be involved in it. There is now great enthusiasm among students towards ICT, especially from students in Grade 10 and in A’ Level classes.

So, this is the entire, overall set up that Mr. Gunadasa and his team had addressed. Mr. Gunadasa states that it is very important to have an eco-system within the Ministry of Education to cover the entire ICT arena. The focus so far, has been on ICT education. But he states that areas such as ICT for education and ICT services should be further addressed. It is necessary to have a mechanism to provide relevant ICT services throughout the country. These areas have already been addressed, but not sufficiently. Mr. Gunadasa, finally states that, in the future, Sri Lanka should not only address areas such as hardware, software, networking and connectivity with regard to education, but address areas such as cyber security, content and relevant training in a comprehensive manner. Moreover, since both the Agricultural and Industrial revolutions were not able to fully achieve targets, Mr. Gunadasa firmly trusts that the country can be changed through ICT, and if we grasp it appropriately the opportunity is still available. 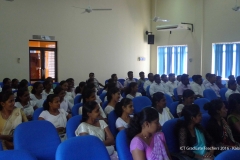 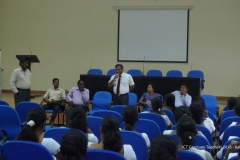 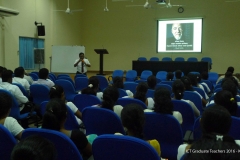 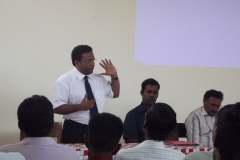 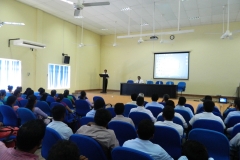 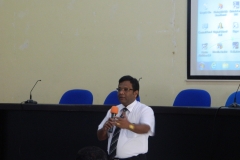 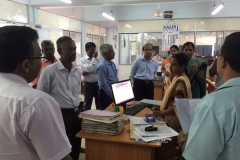 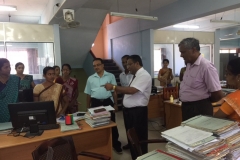 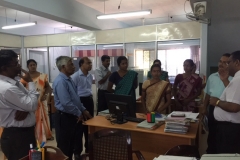 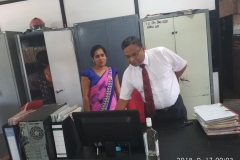 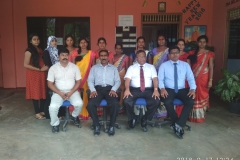 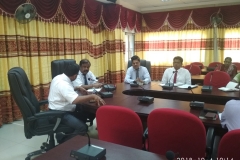 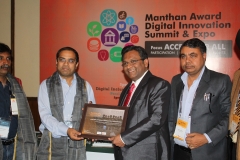 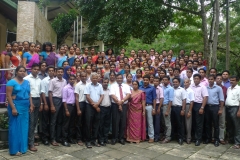