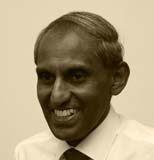 Mr. Chandana Weerasinghe is a Director / General Manager at DMS Electronics (Pvt) Ltd. He is a past pupil of Nalanda Vidyalaya. Chandana’s first exposure to computer systems was an undergraduate at the University of Moratuwa from which he graduated with a first-class honors degree in Electronics and Telecommunications Engineering. After graduation Chandana joined Data Management Systems (DMS) as an Engineer, in 1984. Thereafter, Mr. Chandana Weerasinghe was involved in supporting Wang minicomputer systems, the product which DMS handled at that time.

An important project which Mr. Chandana Weerasinghe handled was the introduction of Sinhala and Tamil into Wang computer systems. There was a demand at this time for computing in Sinhala and Tamil. Chandana and his team linked with the Wang global team which was working on inclusion of languages other than English in Wang computers. This development was mainly for word processing. The package was finalized and was to be launched but this was adversely impacted by a Court case on intellectual property rights, for which there was an out of Courts settlement after about a year. Subsequently DMS developed computing in Sinhala for PCs. DMS launched a Sinhala package called “MawBima” (මව් බිම) and a Tamil language package called “ThaiMozhi”.

Mr. Chandana Weerasinghe continued work as a visiting lecturer at the University of Moratuwa. He was also in the Committee which worked on setting up the IT Faculty at the University of Moratuwa. He was an external Faculty Board member of the IT Faculty. Mr. Weerasinghe continued to be involved in the work of the Department of Computer Science and Engineering at UoM too, as a visiting lecturer.

Mr. Chandana Weerasinghe is a Fellow Member of the Computer Society of Sri Lanka (CSSL), which he joined in the late 1990s. He has served as the President in 2003, as the Vice President, as Secretary and as Student Counselor of CSSL.

In 2003 the e-Sri Lanka Development Program was launched and the Information and Communication Technology Agency (ICTA) of Sri Lanka, was set up. Mr. Chandana Weerasinghe participated in the winding down process of CINTEC as an ex-officio member of the CINTEC Council. He also participated in meetings on setting up ICTA.

Mr. Chandana Weerasinghe was an undergraduate at the University of Moratuwa from 1979 to 1983. He graduated with a first-class honors degree in Electronics and Telecommunications Engineering from the University of Moratuwa (UoM). This is where he had his first exposure to computer systems. There was an IBM 1130 machine. Mr. Chandana Weerasinghe, as an undergraduate carried out FORTRAN programming using a punch card machine into which he punched in the programs and waited with great expectations for the results. Computing was an emerging area in Sri Lanka at this time, and it is this initial experience which made him interested in computers.

There was no option at this time to specialize in computing, but the field closest to computing which Chandana could find was electronics and telecommunications engineering. During this period, Prof. Abhaya Induruwa was in the process of establishing the Department on Computer Science and Engineering at UoM. After Chandana graduated, Prof. Induruwa invited him to be part of the Faculty, but Chandana opted to join the industry.

When Chandana was an undergraduate, there had been visiting lecturers from Data Management Systems (DMS) at the University of Moratuwa. DMS then published an advertisement calling for engineers. Chandana applied and was selected to DMS as an Engineer, in 1984. Thereafter, Mr. Chandana Weerasinghe was involved in supporting Wang minicomputer systems, the product which DMS handled at that time. Then Wang came out with their PC computer range. Around this time, IBM too, came out with their PC range; IBM first exhibited their PC range at the exhibition of the Computer Society of Sri Lanka (CSSL) around 1984.

An important project which Mr. Chandana Weerasinghe handled was the introduction of Sinhala and Tamil into Wang computer systems. There had been a demand from the industry for computing in local languages, and users had started asking why computing was possible only in English. There was an urgent need to enable local language computing to make computers more accessible to the State sector and to a wider section of the populace. As a result, Chandana and his team addressed this issue and ascertained that it was possible to introduce external fonts into the Wang PC. Chandana and his team then worked on getting access to the font memory in the Wang PC and commenced changing the fonts whereby languages other than English could be put in to the memory.

Chandana and his team were in touch with Wang, the Principal company, and they realized that Wang had also commenced a global initiative to introduce various languages into the Wang systems. Wang had already enabled several Asian languages, such as the Thai language. Therefore, the local team linked with the global team and Mr. Chandana Weerasinghe and his team worked thereafter with Mr. Peter Gordon.

Some of the complications encountered with Sinhala and Tamil were that the scripts of these two languages are multi-level, unlike the Latin script; there is a top-level, middle-level and a bottom-level (the pili). Including these characters in computers was challenging.

There was also the issue of internal representation of the characters in the computer; the number of characters for Sinhala was far larger than the 255 available with the standard ASCII which had single byte storage. Sinhala and Tamil characters had to be rendered on the screen on a 3-level format. Then they also faced the complication of input through a keyboard. Mr. Chandana Weerasinghe and the team worked with Wang on this project and adopted Sinhala on to what Wang termed the “polyglot editor”. This development was mainly for word processing.

Initially a large amount of work was carried out remotely, with Chandana and the team in Sri Lanka and Wang teams in the US and also in Brussels. For the final stages of this development, Chandana visited the Wang Labs in USA and also the development center in Brussels, in order to get the package finalized. The Wang package was launched in late 1985. But the launch was adversely impacted by a Court case; Mr. A.K. Kumarasena of Metropolitan Ltd. had initiated a Court case stating that DMS was infringing on a patent which they had filed. The case was heard in the District Court of Colombo for almost a year. After a about a year, the two parties came to an out of Courts settlement and the case was called off.

Subsequently DMS developed computing in Sinhala for PCs. DMS launched a Sinhala package called “MawBima” (මව් බිම) and a Tamil language package called “ThaiMozhi”. These enabled Sinhala and Tamil to be included in the industry-standard PCs. These were a combination of software and hardware. DMS included the hardware component so that there could be intellectual property rights protection. The package was commercially marketed towards the late 1980s and it was purchased by many legal Companies, lawyers etc. There were in parallel other organizations such as the Institute of Computer Technology of the University if Colombo which were working on Sinhala computing. Many other commercial packages on local language computing were available at this time.

Although Mr. Chandana Weerasinghe opted to work in the industry, he continued to be involved in academic work. He was a visiting lecturer at the University of Moratuwa. He was also in the Committee which worked on setting up the IT Faculty at the University of Moratuwa and he was an external Faculty Board member of the IT Faculty. This Faculty was unique because it was the first IT Faculty in a University in Sri Lanka and it also addressed the issue of bringing in students from various disciplines, not only from the Science streams but also from Arts and other disciplines, in order to meet the demand from the industry. Mr. Weerasinghe continued to be involved in the work of the Department of Computer Science and Engineering at UoM, as a visiting lecturer, initially on technical subjects, but later on professional practice which he has been doing up to now.

Mr. Chandana Weerasinghe joined CSSL as a member in the late 1990s. This was when Mr. Lal Chandranath assumed duties as President of CSSL. Mr. Weerasinghe was invited to serve on the Council and take on the role of student Counsellor. As Student Counsellor he was involved in work relating to the Australian Computer Society (ACS) examinations. This was a period when there weren’t many ICT courses of international standing in Sri Lanka, and therefore courses such as ACS and BCS filled in this gap.

After serving two years as Student Counsellor, Mr. Weerasinghe was appointed as Secretary to CSSL. Mr. Niranjan De Silva was President, CSSL at this time. Thereafter Mr. Chandana Weerasinghe was appointed Vice-President, CSSL and in 2003 he was appointed as President of CSSL.
This was a momentous period in the history of ICT development in Sri Lanka because this was the time when the e-Sri Lanka Development Program was launched and the Information and Communication Technology Agency (ICTA) of Sri Lanka, was set up. When ICTA was established, the previous Government apex agency on ICT, the Council for Information Technology (CINTEC) was closed. Mr. Chandana Weerasinghe was an ex-officio member of the CINTEC Council and therefore participated in the winding down process of CINTEC. He also participated in meetings on setting up ICTA.

Mr. Chandana Weerasinghe was also involved in was the area standardization; he was a member of the Sectoral Committee on IT of the Sri Lanka Standards Institution (SLSI). This Committee addressed the standards developed internally such as the standards on ICT and local languages developed by ICTA, as well as international standards. He also states that this Committee carried out commendable work for standards relating to the banking sector such as standards on payments. Mr. Weerasinghe stresses the importance of standards for the industry.

Mr. Weerasinghe states that Sri Lanka has come a long way in the ICT arena. He says that there has been migration from first generation platforms, minicomputers and mainframe computers to personal computers and PC networks, and now there is migration to Cloud and Big Data etc. He also states that the industry has expanded vastly and many people are now able to enter the ICT arena. Opportunities on ICT education has also expanded and he says that Sri Lanka has made vast strides in ICT during the past 30 years. Mr. Weerasinghe states that in comparison to other countries, Sri Lanka still has a long way to go and it is necessary to expand the industry further. But there are good initiatives such as SLASSCOM creating start-ups and also in the area of education organizations such as the University of Moratuwa have moved away from creating job-seekers towards creating job-creators. He states that this is the correct path in the field of ICT in which organizations can be set up with minimal capital when compared to many other industries.