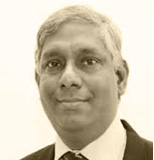 Prof. Gihan Dias was one of the pioneers in setting up and running the Lanka Educational and Research Network (LEARN) and was also the founder and first president of the Lanka Academic Network (LAcNet), a nonprofit, volunteer organization of Sri Lankan students, teachers and professionals. He has also assisted a number of Internet service providers in setting up their own networks.

In 2003 and 2004 Gihan was a founding Program Director of the Information and Communication Technology Agency of Sri Lanka (ICTA), the apex Government body responsible for the development of ICT in the country. At ICTA he led the program on using ICT in local languages, and worked on the development of Unicode compliant fonts and developed the draft ICT Sinhala standard which was standardized by the Sri Lanka Standards Institution (SLSI) as SLS 1134 : 2004. He is the Chair of SLSI’s Sectoral Committee on ICT. While at ICTA, he organized extensive awareness and capacity building programs on the Unicode standard for font developers and other stakeholders. He also chaired ICTA’s IDN Task Force which worked through a consultative process on agreeing on the two IDN ccTLDs for Sri Lanka, (for Sinhala and Tamil) which were implemented through LKNIC. He is a past president of the Internet Society Sri Lanka Chapter. In 2013, Gihan was inducted into the Internet Hall of Fame for his pioneering work on developing the Internet in Sri Lanka.

Professor Gihan Dias – presently of the Department of Computer Science and Engineering, University of Moratuwa – was interested in computers from an early age. He recalls that his father used to receive journals on engineering, and perusing through these, Prof. Dias at an early age decided that he would be an engineer.
After sitting for his Advanced Level exams in 1979, Gihan discovered computers. He found a book on BASIC programming but he had no access to a computer. That was when he came across an advertisement in a newspaper on a computer course on BASIC programming to be organized by Bartleet Electronics. Gihan applied, was selected and he learnt how to program in BASIC using a microcomputer. Thereafter he decided that he would work with computers.

Gihan was then selected to study Engineering at the University of Moratuwa. He graduated in 1986, and almost simultaneously the University decided to commence a Department of Computer Science. Prof. Abhaya Induruwa, who was in charge of the Department, agreed that he could join this new Department and he was the first person recruited there. In late 1986 Gihan Dias left Sri Lanka to read for a Ph.D. degree at the University of California.

It was in California that he discovered the Internet. At this time the Internet was available to people in Universities, but not to everyone. Sri Lankans in various Universities in the USA commenced communicating with each other and exchanging information using electronic mail. This group kept growing and it was named SLNET – Sri Lanka Network. What they did not realize then, was that this was one of the very first social media networks. A decision was taken thereafter to connect to Sri Lanka through the Internet.

The only available technology then was the dial-up modem connecting through a telephone line, and the cost of a telephone call from the US to Sri Lanka was exorbitant. To ensure sustainability, Gihan Dias founded the volunteer, non-profit organization, Lanka Academic Network (LAcNET).

One of the most significant milestones in Prof. Dias’ career was setting up the country code top level domain .lk. Many countries were then using the two letter country codes such as .jp for Japan and .uk for United Kingdom. Gihan Dias emailed Jon Postel requesting the country code .lk for Sri Lanka. Consequently, John Postel replied and handed over .lk to Gihan Dias. Later, Prof. Dias was the Registrar of the .LK Domain Registry and subsequently became its CEO.

Gihan returned to Sri Lanka in 1992. Three Universities – the Universities of Moratuwa, Colombo and the Open University were connected, and subsequently an Internet connection was obtained through Sri Lanka Telecom. This was the commencement of the Lanka Educational and Research Network (LEARN), the academic network in Sri Lanka which Professor Dias was instrumental in setting up and led for 10 years. By about 2002, students and staff of approximately about 12 Universities were connected.

By 2003, Professor Dias was on Sabbatical leave. He was a member of the Internet Committee of the Council for Information Technology (CINTEC) the previous Government apex agency on ICT. This Committee addressed the issue of developing and promoting the Internet in Sri Lanka and agreed to set up a website which would contain information the Internet. It was necessary to include information in all three languages – viz. Sinhala, Tamil and English. The Committee realized then that there were no Sinhala fonts, although proprietary legacy fonts which were incompatible with each other were being used. When an email was sent in Sinhala, a font had to be attached. If no font were sent, the email was displayed as indecipherable symbols. To read the online Sinhala newspapers, different fonts had to be downloaded.

The Committee then ascertained after extensive discussions and research that Sinhala fonts had to be compliant to the international standard Unicode. This code could handle all the languages including Sinhala, and would enable the exchange of information without the need to attach fonts, and view websites without downloading fonts. A Fonts Committee, chaired by Prof. Dias, comprising many stakeholders such as the University of Colombo School of Computing, the Sri Lanka Standards Institution etc., was thus formed at CINTEC.

With the closure of CINTEC and the setting up of the ICT Agency of Sri Lanka, the Fonts Committee was taken over to ICTA and renamed as the Local Languages Working Group. Prof Dias joined ICTA as a Program Director and led ICTA’s local language initiative. Prof Dias emphatically states that at present, everything that can be written in Sinhala can be written using computers in Unicode compliant Sinhala. This initiative has been a success, and using ICT in Sinhala is now ubiquitous.

Prof. Dias was involved in setting up the Sri Lanka Chapter of the Internet Society of which he was the past President. Members work on creating awareness and facilitating more people to safely use the Internet. Professor Dias further states that Sri Lanka is one of the countries where the Internet is most affordable. It is possible for anyone, anywhere in the country to use the Internet from home, from an office or anywhere else.

In conclusion, Prof. Dias states that at present he is involved in e-learning; viz. how to make e-learning available especially to those who are studying in Sinhala and Tamil. The other area that Prof. Dias is addressing is language. He states that we should be proud of our heritage and that there is more that can be done to facilitate the use of ICT in Sinhala and Tamil. 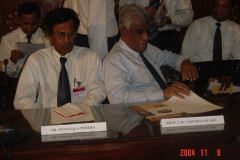 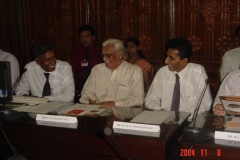 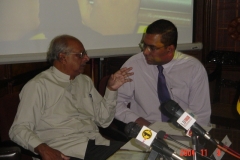 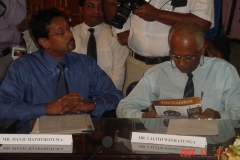 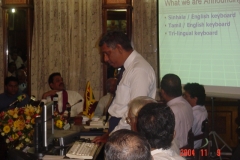