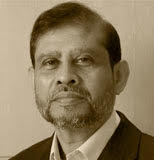 Prof. Abhaya Induruwa’s entry into the ICT arena commenced in 1973 while he was a student at the Katubedde Campus of the University of Sri Lanka, which is now the University of Moratuwa. He earned his PhD degree at Imperial College in London, UK.

Prof. Abhaya Induruwa is aptly known as the “The Father of Internet in Sri Lanka”. The areas that he has identified, striven for, and implemented have made a significant impact on the Internet scenario in Sri Lanka. Setting up LEARN which originally stood for “Lanka Experimental Academic and Research Network” in the nineties was a key milestone and with the limited resources that he could muster Prof. Abhaya Induruwa established LEARNmail in 1990 – the very first Internet email for academic and research institutions in Sri Lanka. The registration of Sri Lanka’s Country Code Top Level Domain, .LK, was a natural progression of the introduction of LEARNmail. Prof. Gihan Dias of the University of Moratuwa became the technical handle and Abhaya Induruwa was the administrative handle.

Prof. Abhaya Induruwa was a member of the very first Board of the Computer and Information Technology Council of Sri Lanka (CINTEC) and continued to serve on CINTEC Boards until 1998.

It is 8th August 2016, and Prof. Abhaya Induruwa has just returned from the 34th National IT Conference powered by the Computer Society of Sri Lanka (CSSL), which he was involved in founding, together with several academics, IT industry professionals and vendors such as IBM and ICL. CSSL was formed in 1976 to represent the IT profession and for promoting Information Technology (IT) in Sri Lanka.

This was just one of the many milestones in Prof. Induruwa’s career which is strewn with accomplishments all of which have made an impact on the development of ICT in Sri Lanka.

Prof. Abhaya Induruwa’s entry into the ICT arena commenced in 1973 while he was a student at the Katubedde Campus of the University of Sri Lanka, which is now the University of Moratuwa. As an undergraduate at this University, he was first introduced to FORTRAN programming by Prof. Sam Karunaratne [Annex 1a, Annex 1b] who is the first Data Processing Manager in Sri Lanka. “To run our programs, we had to go to the State Engineering Corporation (SEC), where they had an ICL 1903 computer” reminisces Prof. Induruwa. Late Dr. R B Ekanayake, who became the first President of the CSSL, was the SEC’s DPM at the time.

Computing at the University of Moratuwa

By 1980 Prof. Induruwa was in charge of the Computer Center at the University of Moratuwa where there was an IBM 1130 computer system which was installed in 1974 [Annex 2]. Under his leadership staff were involved in the computerization of the payroll of the University of Moratuwa and the University Provident Fund for the University Grants Commission (UGC). System Analysts and Programmers were recruited and RPG II programming language was used. The second era of computing at Moratuwa started with the establishment of a Computer Library and a Computer Laboratory in 1984 [Annexes 3a-3d]. From the former, the students could borrow Sinclair ZX Spectrum computers – like borrowing a book from the Library – and the latter, equipped with more powerful microcomputers, was used to conduct teaching while also catering to the programming needs of the researchers and teaching staff. Teaching was based on modern programming languages such as BASIC and Pascal. A conference and an exhibition were held to mark this occasion [Annexes 4a-4b].

Consequent to UGC approval for setting up Departments of Computer Science in three Universities – viz. in the Universities of Colombo, Moratuwa and Peradeniya – the University of Moratuwa established the Department of Computer Science and Engineering on 29th January 1985 with Prof. Induruwa as its Founding Head, and admitted the very first batch of students to this department in 1986. In keeping with industry advances multi-user computer systems such as the TRS80 (16 bit) running Xenix and the SORD (32 bit) running Unix were added. In 1986, the possibility of connecting to a remote computer was demonstrated by logging into the TRS 80 at the University of Colombo from a similar computer at University of Moratuwa using UUCP over a telephone line connected to modems with 300 baud (bits per second) speed. “This was an important historic event but at that time little did we realise that this moment marked the beginning of the computer networking era in Sri Lanka” said Prof. Induruwa.

A key point in the University of Moratuwa Computer Policy which Prof. Induruwa was instrumental in drawing up was that computer networks and data communications should be a central focal theme for development at the University. In adherence to this policy, the first Ethernet Local Area Network (LAN) in a Sri Lankan University was deployed at Moratuwa University in 1988-89 connecting 50 PCs to central MicroVAX 3600 mini-computer systems running Ultrix-32 multiuser operating system.

In 1984, another project that Prof. Induruwa was actively involved was the introduction of computers to schools. The funding that the Ministry of Education had at that time for the project was LKR 100,000/-. Through this project, computer labs with Sinclair ZX Spectrum computers were set up in schools which had Advanced Level Science streams. Due to hardware resource limitations only, programming in BASIC was taught to the school children. Altogether 200 teachers were trained and a quarter of this number was trained under Prof. Induruwa’s supervision. It may be deemed that there was no major impact, but the implementation of this project meant that there was recognition even at this stage of the necessity to introduce computing in schools. It was a start. Later, not only leading schools such as Ananda College, Nalanda, and Royal College, but distant schools such as the Kahagolla Madya Maha Vidyalaya, Diyatalawa opened up Zonal Computer Centers with much better resources. “I was Acting Chairman of CINTEC when I received an invitation to the opening of the Computer Centre at Kahagolla Madya Maha Vidyalaya. In my speech, I revealed a secret that this was the school where I started my schooling back in 1954. I think it gave a pleasant surprise to all those attending including the veteran politician Mr. W J M Lokubandara” Prof. Induruwa recalls.

In 1984 the National Computer Policy was being formulated under the Government of the then President, JR Jayewardene. This policy initiative was given leadership by Prof. Mohan Munasinghe. The Computer Policy (COMPOL) lead to the enactment of the Computer and Information Technology Act no. 10 of 1984, which resulted in the establishment of the Computer and Information Technology Council of Sri Lanka (CINTEC) which was later renamed as the Council for Information Technology of Sri Lanka. This was the apex Government Institution on IT. Prof. Abhaya Induruwa was a member of the very first Board of CINTEC and continued to serve on boards until 1998. He was also a member of several Statutory Committees at CINTEC, through which the CINTEC work was carried out – viz., the Public Sector Computerization Committee, the Computer Education Committee, National Languages Committee, and particularly he was a very active member of the Data Communication Committee. This latter Committee evolved into the Internet Committee.

Work leading to setting up LEARN in the nineties was a key milestone. LEARN originally stood for “Lanka Experimental Academic and Research Network”. Prof. Abhaya Induruwa had realized that computer networks play a major role in enhancing the academic and research capabilities of staff and students. LEARN was a result of a proposal that Abhaya Induruwa made in 1989 to the then Ministry of Higher Education for interconnecting Universities, higher education institutes and research institutes in Sri Lanka.

The proposal was accepted by the UGC and the Ministry of Higher Education, but funding was an issue. Therefore, with whatever resources that he could muster and with assistance from his staff in the Department of Computer Science and Engineering at Moratuwa, and Sri Lankan students who were studying in Canada, UK and the US, Prof. Abhaya Induruwa established LEARNmail in 1990 – the very first Internet email for academic and research institutions in Sri Lanka. This was indeed another milestone [Annexes 5a – 5b]. Over the next couple of years, the LEARNmail volume gradually increased and with LKR 15,000 donated by the Council for Information Technology (CINTEC), a high-speed modem was purchased to connect to the global Internet and to support the exchange of increasing volume of LEARNmail.

With perseverance, Abhaya Induruwa reformulated his proposal in 1992 for developing LEARN as an IP network within Sri Lanka, initially connecting three nodes, viz. University of Colombo and the Open University with the University of Moratuwa. The University Grants Commission (UGC) allocated LKR 3 million to obtain connectivity through Sri Lanka Telecom.

There were no fiber optic connections then, so Prof. Induruwa and his team were able to obtain 64 Kbps wireless (radio) links through SLT. With the commissioning of these links, LEARN became the very first IP wide area network (WAN) in Sri Lanka.

By 1995, LEARN and LEARNmail were popular among its users. Prof. Induruwa felt that the time was right for a permanent connection to the Internet. In addition, by this time, commercial Internet was also available in Sri Lanka – Lanka Internet was the first company to provide ISP services in Sri Lanka and SLT was able to connect Sri Lanka to the global Internet using a dedicated leased line. Accordingly, LEARN was also given a dedicated connection to the Internet and thus, in 1995 LEARN was finally connected to the global Internet. NetCon 95, a three-day conference attended by more than 300 delegates was organized to mark LEARN’s connection to the Internet and to commemorate the 10th anniversary of the Department of Computer Science and Engineering. [Annexes 6a–6b–6c] “I was very fortunate to have some of my most diligent students such as Mr. Clement Adams, Prof. Gihan Dias, Prof. Lalith Gamage, and late Prof. Sardha Wijesoma joining the newly formed Department of Computer Science and Engineering and it was their dedication and hard work that led to most of these achievements”, says Prof. Induruwa in appreciation.

The registration of Sri Lanka’s Country Code Top Level Domain, .LK, was a natural progression of the introduction of LEARNmail. Prof. Gihan Dias of the University of Moratuwa became the technical handle and Abhaya Induruwa was the administrative handle. After .LK was registered, the normal hierarchical email-addressing schema for institutions was followed. Domain names under .LK are presently being registered by the .LK Domain Registry (www.nic.lk)Internet Society

The Internet Hall of Fame

Prof. Abhaya Induruwa is aptly known as the “The Father of Internet in Sri Lanka”. The areas that he has identified, striven for, and implemented have made a significant impact on the Internet scenario in Sri Lanka.
In conclusion and summing up, Prof. Induruwa states that the future of the Internet in any country – what he refers to, as the next wave of Internet disruption – is the introduction of the Internet of Things. His advice to Sri Lanka is that this is an opportunity that Sri Lanka should not miss, especially since the technology for the introduction of the Internet of Things is not expensive. What is required he says, is a business model and the necessity for the industry to recognize the requirement and develop a solution for which there will be a demand from not only Sri Lankans but from the whole world, which will bring in revenues for Sri Lanka. Following this theme Prof. Induruwa delivered a keynote speech at the 34th National IT Conference concluded on 9th August 2016.
What is next? “A Centre of Excellence for Cybercrime and Security Education, Training and Research in Sri Lanka is my next dream” enthused Prof. Induruwa. 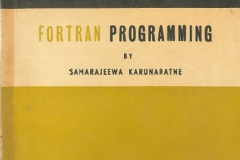 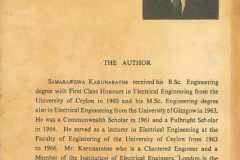 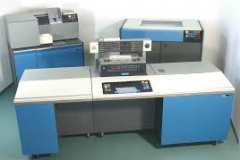 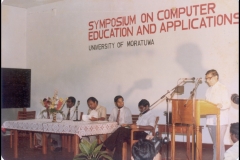 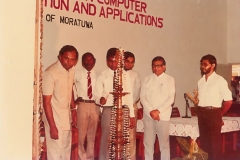 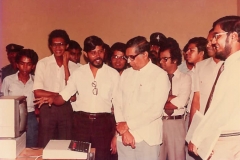 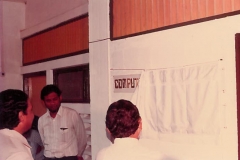